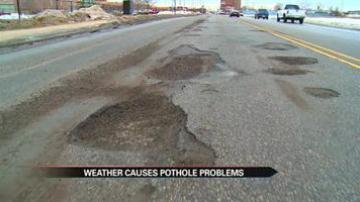 SOUTH BEND, Ind. -- The weather is wreaking havoc on local roads. Potholes are forcing Michiana drivers to swerve or risk damaging their tires, rims and alignment. INDOT says its crews are working hard to fill the holes in the roads.

Potholes on Sample Street in south bend are big enough for a 5'7" tall reporter to lay inside.

"I've seen quite a few big ones. Just coming up here on 23 a little bit ago there's some pretty good sized ones," said driver Randy Hopkins.

You can't go more than a couple of feet on State Road 23 without having to dodge potholes.

Because 23 is a state road, the holes are INDOT's problem.

Until INDOT crews fix the potholes, drivers will have to swerve around them.

"You have to hit them sometimes because its two lanes so sometimes you can't swerve into the other lane to avoid them," said driver Jason Fowler.

In South Bend, crews are working nonstop patching the roads.

They are focusing on the 500 miles of main arteries.

They are using a high performance cold patch that should hold until spring.

For the state roads-INDOT says they're working around the clock and ask for your patience.

South Bend says they plan to get caught up by the end of next week.

In South Bend, you can call 311 to report potholes, especially if you think it has done damage to your car.

The St. Joseph County Highway Department is responsible for potholes on county roads.