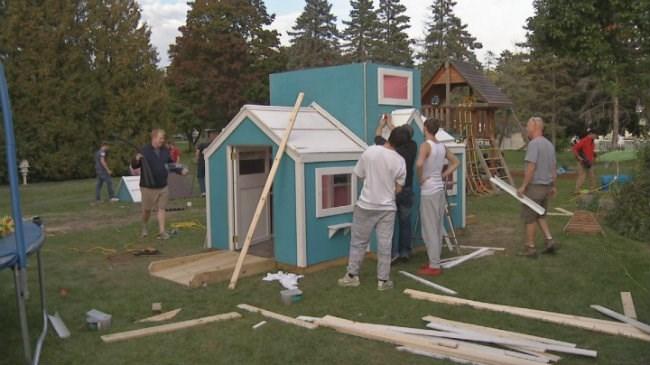 Michigan -- What started as a school project for at-risk teens in Kentucky, has taken on a life of its own. Now, a young girl in Mid-Michigan battling a terminal disease is smiling big all thanks to some students' new-found enthusiasm for learning.

Six-year-old Kolette Klopp made sure to close her eyes before seeing the finishing touches on her new playhouse, a surprise five months in the making.

A surprise created by the hands of a group of students from a Kentucky alternative school.

"I have a lot of students that come to us for a variety of reasons. Our school is typically a school where kids haven't necessarily found success in other places so the payoff for us is the kids realizing how powerful they really are," Jerry Gels with Boone County Schools in Kentucky said.

The powerful lesson behind building playhouses is how math and science are applied every day.

So far, they've built a dozen playhouses in northern Kentucky but this house is different - they'll actually get to meet the person they are building it for.

The anticipation fuels their work.

"I Just want to see the look on her face when she comes out and see's what we've done," Jacob Kremer, who is helping to build the house, said.

Now, they're giving a little girl the surprise of her life.

It's a big house for a little girl that has not had the easiest life.

Kolette has a terminal muscle disorder similar to ALS.

That hasn't slowed down the big-hearted girl who only wants to share her new house with her seven brothers and sisters.

The only people more grateful than Kolette are her parents, Karrie and Bryan Klopp.

"It's just nice that these boys took the time to do it and it turned out wonderful, and she loves it and that's all that matters," they said.

While little Kolette will be enjoying the playhouse again after school on Wednesday, her team of builders will spend the day site-seeing in Michigan, including a tour of the University of Michigan.