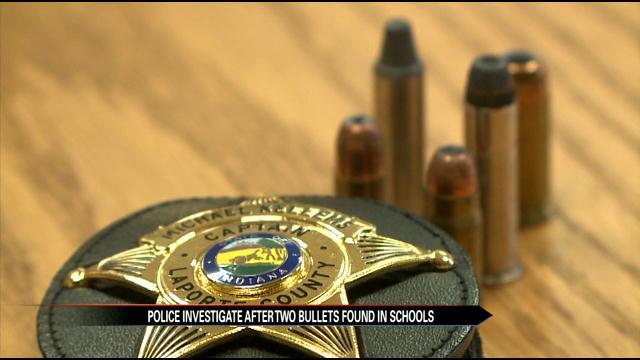 Police think it could be a copycat situation.

If students see that one school was put on lock-down and removed from classes, police believe the chances are they will try to do the same thing at their school to get out of class.

Sheriffs say they just cannot be so sure, though.

“Often times in our experience, in our line of work; where there are bullets, there are guns as well,” said LaPorte County Sheriff John Boyd.

Many might think it is kids being kids, but police and school administrators do not want to take any chances.

“It just isn't safe; it puts everybody on edge. Especially in our society today, where we've seen so many school shootings occur. We just can't take this lightly,” said Sheriff Boyd.

As a precaution both high schools were put on lock-down while deputies searched the schools and lockers.

“It's a serious disruption for the educational process in the buildings,” said Boyd.

Many parents are voicing their opinion about the serious disruption on Facebook.

One look at the LaPorte County Sheriff's Facebook page and there are a variety of responses.

Some folks are appreciative.

“Thank you for responding quickly and making sure my children are safe,” said one mother.

“This could have been a mistake, we live in a rural area, maybe it was someone who was hunting or target practicing,” said another parent.

Sheriff Boyd says no matter what the reason, they cannot take it for granted.

The county has had six of these incidents since October of 2014, and Boyd said every single time they will respond the same exact way.

“I would rather someone accuse us of overreacting rather than under-reacting and a tragedy occur,” said Boyd.

The investigation is ongoing and if someone is found guilty of planting the bullet they will face criminal charges.

In the meantime, there are increased police presence at all county schools for the next several days.