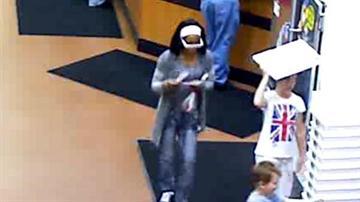 ELKHART, Ind. -- The Elkhart Police Department has released surveillance photos of a woman suspected of stealing a wallet out of a woman's purse at a local grocery store.

The victim said she left her purse in her cart, then walked away to look at items on the shelf.

That's when the suspect pulled her wallet out of her purse.

The person is suspected to have used the victim's credit cards in St. Joseph County, Indiana and attempted to use it in Chicago.

The suspect appears to be a thin black female wearing a white visor and white sunglasses.

If you have any information, call the sheriff's department's tipline at 389-4777.