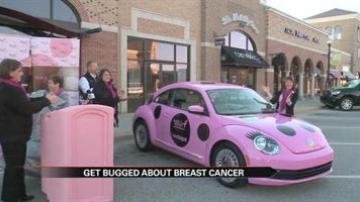 Tuesday, they introduced their newest icon, Lily the pink Ladybug.

Although she made her Northern Indiana debut, Lily's actually been around for a while but only in a different form, chocolate.

"In 2000, I was diagnosed with breast cancer. During my treatment, there was only a few things that I could eat and one of them was chocolate. So, it just became an idea one night wondering how I could help raise money," said creator of Lily the Pink Ladybug, Linda Herter.

Thanks to her creation, Herter's already raised thousands of dollars for breast cancer, both locally and nationally.

Decals are currently available at 10 area locations. You can find the list here.