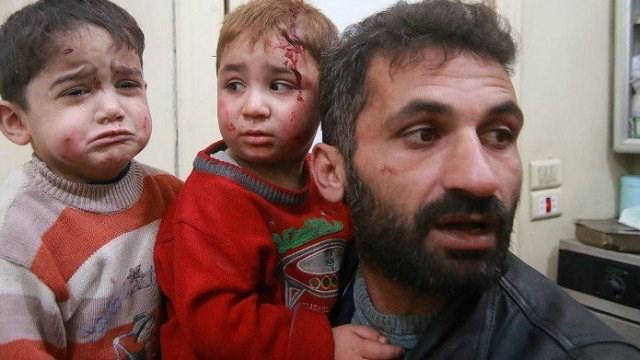 More than 40 airstrikes and barrel bombs struck rebel-held neighborhoods in the besieged east of the city Thursday, the volunteer group, also known as the White Helmets, said on Twitter. It said many victims remained trapped under the rubble.

"The situation is very, very difficult," he said.

Activist group the Aleppo Media Center released images of children who survived Thursday's airstrikes on eastern Aleppo -- a boy with wounds to his abdomen laid out on a stretcher, two toddlers with bloodied faces.

Syrian government aircraft resumed airstrikes Tuesday on the war-ravaged northern city after a relative lull, although clashes and shelling have continued near the front lines.

Syria's grinding five-year conflict has devastated Aleppo, divided between government-controlled areas in the west and rebel positions in the east.

The regime's siege of rebel-held neighborhoods has triggered a humanitarian catastrophe as food, water and medical supplies run low.

The strikes that resumed this week followed a dire text message sent en masse to Aleppo's eastern residents, essentially telling them to flee or be killed in the bombings.

There had been a three-week lull in air raids before the Syrian government blitzed eastern Aleppo on Tuesday, using what the regime called "precision weapons to target terrorist positions."

Rebels took control of eastern Aleppo in 2014, and government forces have besieged the area, battering it from above with the help of Russian air power.

Moscow has sought to distance itself from the blitz, with Deputy Foreign Minister Sergey Ryabkov saying Wednesday that the Russian air force had not carried out the Aleppo strikes, according to state-run news agency Tass.

Following last week's US election, questions have swirled over how President-elect Donald Trump might approach the war, which has seen the United States and Russia at odds in many respects.

Yuri Ushakov said that the level of cooperation over the conflict between the two powers was "neither good nor bad," but that the Kremlin saw a chance of "normalizing" this relationship with the US President-elect as they saw terrorism as a "common enemy."

Russian President Vladimir Putin and Trump discussed the "unsatisfactory" cooperation between their countries over Syria during a phone conversation earlier this week, Tass reported.

Russian Foreign Minister Sergey Lavrov and US Secretary of State John Kerry are due to meet in the coming days in Lima, Peru, where Syria will be on the agenda, Ushakov said.

Central to the disagreement between the two powers is the question of which groups in the conflict are regarded as terrorists.

The old Cold War enemies agreed to target ISIS, but the United States has armed and supported what it calls moderate rebel groups to fight the militants. Many of these groups also oppose Syrian President Bashar al-Assad's regime.

Syrian President Bashar al-Assad has told Portugal's RTP TV that Trump could be a "natural ally" to his government, but said he was dubious the incoming US leader could influence relevant decision-makers to change the American strategy.

Trump has previously suggested he is opposed to targeting the Syrian regime and ISIS at the same time, and has said he is willing to work with Assad.

CNN's Kareem Khadder and Angela Dewan contributed to this report.