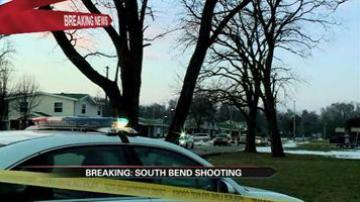 SOUTH BEND, Ind. -- Officials are still searching for at least one suspect involved in a deadly South Bend shooting.  It happened just after 7 p.m. Tuesday in the 1800 block of North Fremont Street just outside of Lasalle Landing Apartments.

Police say the ShotSpotter technology alerted them to several gunshots being fired in that area. They responded immediately and found 2 victims at the scene.

Both victims were young men, 19 and 20 years of age. They were taken to Memorial Hospital to be treated for their wounds.

The 20-year old, Brilan Williams, was treated and released, but the 19-year old, Cornell Taylor, died at the hospital.

Investigators say there was some sort of gathering at a nearby park when an altercation broke out, which eventually led to gunfire.

After the shooting, police say emotions were running high among the people at the gathering.

Some had to be physically removed from the crime scene by officers in order to protect the evidence.

Officials say one woman was handcuffed and taken away in a squad car for questioning, but has since been released.

Because the violent crime turned deadly, the St. Joseph County Metro Homicide Unit has taken over the case.

Crime scene technicians did collect evidence at the scene, but police are still urging for more help from the public.

"I'm getting tired of these shootings and nobody calling down here and helping us," said Lt. Dave Wells of the St. Joseph County Metro Homicide Unit. "We can't do this alone. We need people to come forward and help us, give us a name, call us at homicide, call Crime Stoppers, lead us in a direction where we can make an arrest."