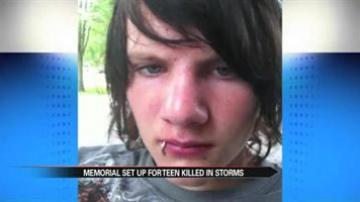 KOSCIUSKO COUNTY, Ind. -- A teen died in Winona Lake Tuesday morning when a tree fell on his home in the Fairlane Mobile Home Park.

The victim was identified as 14-year-old Danny Holbrook.

His best friend, 10-year-old Corbitt Hollon, was in Danny's room with him when the tree fell.

"We were in the room and Danny was right here and I was in the other side of the room and we heard a crack outside so then Danny just kept talking on his phone and then the tree collapsed. There's a little hole right there so I moved something and climbed out," said Hollon.

Hollon says he was playing video games and talking to Danny when they heard a loud crack and then the tree came down.

"He was on the phone face chatting and I was standing there by the TV when it went and collapsed on the ground," said Hollon.

Hollon says he tried pulling his friend out from underneath the rubble.

"I tried to dig through it to get him to pull him out and see if he's okay but it was all blocked so I couldn't," said Hollon.

First responders confirmed someone died at the scene.

Hollon says it's a memory he will never forget.

"I think God did it so that Danny can go up to heaven and have a better life than he's having down here," said Hollon.

A family friend has set up a memorial at Titus Funeral Home in Warsaw for the Holbrook family.

The funeral home says you can mail them a check and put Danny's name in the memo to help out the family.