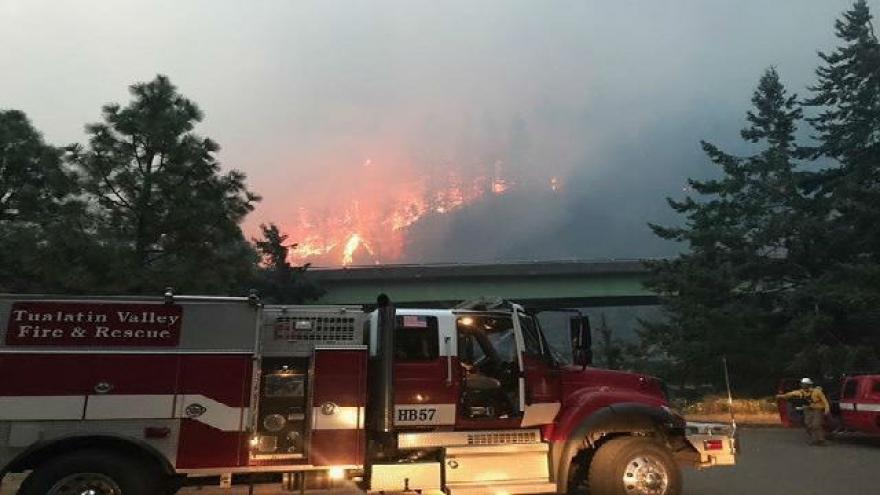 (CNN) -- Oregon State Police have identified a teenager they believe started the raging Eagle Creek Fire that has now merged with another fire, burning around 31,000 acres and forcing hundreds of residents to evacuate.

A 15-year-old boy from Vancouver, Washington, is suspected of igniting the blaze, said police, who did not release the boy's name.

"It is believed he and others may have been using fireworks, which started the forest fire along the Eagle Creek Trail," Oregon State Police said in a statement. "The suspect was contacted by law enforcement in the parking lot of the trailhead and cooperated with the investigation."

No arrests have been made or formal charges filed so far, police said. Police want witnesses or people who heard fireworks or other explosions around the trail to come forward. Authorities said they have been in touch with the teen's companions.

"We are very confident that we have the correct people in this case that started the fire," Oregon State Police Capt. Bill Fugate told reporters on Wednesday. He said findings from the investigation will be forwarded to prosecutors, who can determine whether the alleged act was arson, negligence or reckless behavior.

The teen and his parents are cooperating with the investigation, he said.

The fast-moving fire, which started Saturday, has not been contained, Gov. Kate Brown said at a Tuesday news conference. The fire is burning east of Portland, at the Columbia River Gorge National Scenic Area.

"Our hearts are breaking; the Gorge is Oregon's crown jewel," said Multnomah County Chair Deborah Kafoury, who issued a declaration of emergency for several areas of the county.

The fire was fueled by 30- to 40-mph winds and dry conditions, Brown said.

"We're working very hard to ... make sure our Oregonians and firefighters are safe and to preserve our homes and our critical infrastructure," the governor said.

'Do you realize how dangerous that is?'

The Eagle Creek wildfire merged with the nearby Indian Creek fire, spreading approximately 15 miles and crossing the Columbia River, according to an online update by the National Wildfire Coordinating Group. More than 600 personnel were working to contain the fire.

Liz FitzGerald, who lives in Portland, told CNN about an encounter she had around the time and place authorities say the fire started that may offer clues to its origin.

FitzGerald was at the Eagle Creek Trail on Saturday afternoon, hoping to beat the heat by heading out to Punch Bowl Falls, a waterfall at the end of the trail, she said.

When she was about 1 1/2 miles in, FitzGerald encountered a group of teenagers, including one who she saw "throw a smoke bomb," she said.

"He lobbed it casually into the canyon," she said, adding that another teen was recording a video.

"Do you realize how dangerous that is?" FitzGerald said she asked the teen, mentioning a nearby wildfire and how dry the area was.

FitzGerald then noticed smoke coming up from where she believed the object had landed, she said.

A girl, who was with the group of teens, said, "Oh s***," FitzGerald recalled.

Then the teens continued down the trail, she told CNN.

FitzGerald headed in the opposite direction but thought about what she had seen. She soon encountered a couple on the trail and told them about the smoke bomb. The couple told FitzGerald they had seen a group of kids with firecrackers and that they were heading down to "rat them out," she recalled.

FitzGerald, who didn't have a cell phone, took off running to report what she'd seen to authorities, she said.

When she passed the area where she had encountered the teens, "I saw a massive cloud of smoke. I could smell fire. I couldn't see the flames. It's steep -- but I knew the forest was on fire," she said.

'There was no sense of panicking'

As she ran down the trail, FitzGerald saw the teens again, "casually walking down the hill," she said, adding the group now included fewer people.

"Do you realize you just lit a forest fire?" she asked them, she recalled.

"What are we supposed to do about it now?" one of them replied, FitzGerald told CNN.

FitzGerald found a forestry law enforcement officer at the parking lot and reported what she had seen. She then saw a minivan pull away with a girl sitting in the front seat.

"The look on her face said, 'This is so exciting, we're getting away,'" FitzGerald said.

FitzGerald agreed to get into the officer's car and they followed the minivan, which the officer pulled over.

As the teenagers were questioned, FitzGerald watched them from a distance. The initial forestry officer left and a state police trooper arrived to talk to the teens, including one FitzGerald said she recognized as the one who'd thrown the smoke bomb.

From her vantage point, the teens displayed "no sense of panicking. I didn't see any reaction. They just looked bored," FitzGerald said.

In the meantime, the fire and a huge cloud of smoke thickened behind them, she said.

Not aiming to 'make the kids pay'

Due to the fires, 153 hikers had to shelter overnight Saturday as they were trapped between the fires at Eagle Creek and Indian Creek. The National Guard airdropped supplies to them, reported CNN affiliate KOIN.

All hikers and campers in the area were accounted for and safely removed or led out Sunday, state police said.

FitzGerald said she shared her story with CNN and other news outlets because she wants to see good come of it.

"I didn't run down to alert the authorities in order to 'make the kids pay.' I wanted them to know about the fire, and I wanted the kids to be accountable," she said. "But I believe that everyone makes mistakes and everyone should be allowed a second chance."