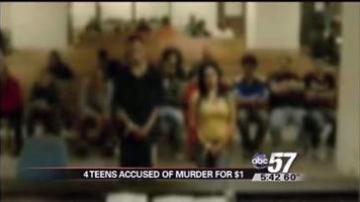 HOUSTON, Texas -- Four teens are accused of robbing a homeless man of $1, and killing him.

Police said the youngest suspect is a 16-year-old girl.

The four went before a judge Thursday in Houston.

They say one of the teens, an 18-year-old, confessed to the killing, and said they initially talked about robbing prostitutes, but changed their minds when they came across their victim.