Tenants at a disadvantage in eviction hearings 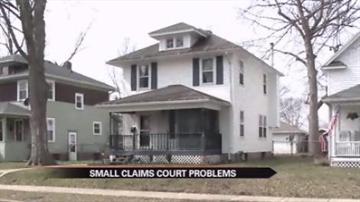 ST. JOSEPH COUNTY, Ind. -- A local judge admits there is a problem in small claims court. He says most people don’t know what their rights are, or what to expect when they go to court. Because of that, tenants are at a disadvantage in eviction cases.

"I became a US Citizen a few years ago because this is home and I love this country,” said Lane.

While there she says she has had to deal with a leaking roof, water damaged walls, and no smoke detectors anywhere in the house.

But things came to head between her and her landlord when she smelled gas in the house.

"He was very upset that I called NIPSCO,” said Lane.

NIPSCO shut off the gas to her kitchen and told her they would not turn it back on until the landlord replaced a leaking stove.

"He said that it's not his obligation to replace the gas stove,” said Lane.

So she went out and bought a used one and deducted the cost from her next month's rent.

She also contacted code enforcement who came out and cited the home for what they described as several minor violations.

"The day he received the letter from code enforcement, with all the citations, that afternoon is attorney filed the eviction papers against me,” said Lane.

In court, Lane tried to defend herself.

"It felt like as if it was a done deal before I even walked into the courtroom,” said Lane.

Lane says, the judge would not listen to her defense and in the end, he evicted her.

Attorney Kent Hull wasn't representing Lane at the time, but he is now.

"It is not unusual for landlords to react when a report is made to code enforcement by retaliating against the tenant and evict the tenant,” said Hull.

Officials from the code enforcement department validated that remark today when i talked to them, saying they see such practices a fair amount.

Over the last year a group with the St Joseph County Bar Association has developed a response to this issue and other problems in small claims court.

They are currently working to find a suitable way to educate residents while they wait for their cases.