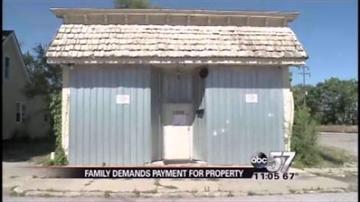 SOUTH BEND, Ind. -- Fireworks flew at the South Bend city council meeting Monday night. A family says they're being forced out of their home that has been in their family for six generations.

You may remember that strip club on Kendall Street the city bought for $350,000.

The family that lives in the home right next door is only getting paid one seventh of that to move from their home which has been in their family for six generations.

"We are concerned we are getting pennies for dollars on that property when you guys are giving the bar next door $350,000 and we don't think that is fair,” said the Franklins.

The Franklins say they are being forced out of their home by the city's redevelopment project.
But their problem isn't with the move.

After the meeting, council member Valerie Schey, who voted yes to the $350,000 strip club price tag met with the Franklins to see how she could help.

"I've committed to arrange a meeting with both the attorney that oversees the redevelopment commission as well as the gentleman that negotiates the purchase price,” said Schey.

“It's not just the purchase price of the parcel itself. It's moving costs as well as the cost to purchase a future location,” said Schey.

She said she relies heavily on the expertise from the city's community investment department.

But says she is committed to finding a fair solution for residents that still allows room for new businesses to move in.