The faces of veterans are changing 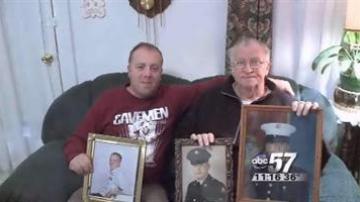 MISHAWAKA, Ind. -- On Friday, the nation and folks here in Michiana will honor veterans for the sacrifices they have made.  Imagine the different stories exchanged between World War II veterans and veterans of today.

One fought in Vietnam.  The other fought in Iraq or Afghanistan.  They were both very different wars, but were fought for the same reason: freedom.

Hank Eberlein says growing up he always admired his father for serving in Vietnam and he says when he saw his dad's uniform he knew he wanted to follow in his father's brave footsteps.

"I could see myself in it when I got older.  It got stuck in my head, so I decided I would do it," said Hank Eberlein.

He served in both the Army and marines and was stationed in Iraq and Afghanistan but he says when he got there he went through some terrible things.

"In Iraq, my humvee was hit by an IED," said Hank.

Hank's father Greg says war technology has changed, but the horrors of war stay the same.

"People getting maimed and there were booby traps going off. People lost their legs and arms," said Greg Eberlein.

Hank and Greg agree there was one thing that was very different for each of them; their homecoming. Greg says when he returned to the United States people weren't proud of him for protecting their freedom.

"People used to picket, and they would call anyone who was in Vietnam a baby killer," said Greg Eberlein.

For Hank, an Iraq and Afghanstan veteran, people welcomed him with open arms.

"When we come home, we get treated very well.  We get parties and parades and things," said Hank Eberlein.

They hope no matter what was veterans fought in, people take time tomorrow to thank them for their sacrifice.

Hank Eberlein's wife is pregnant with their first son.  He says he wouldn't mind if his son continued the family's military legacy.