The Fighting Irish begin a season of 'Great Expectations' 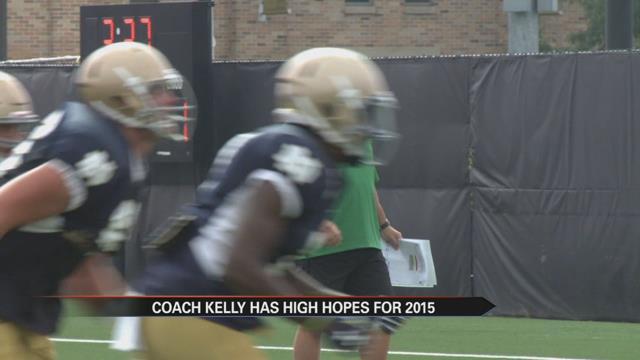 The Notre Dame Fighting Irish officially opened the football season with their 2015 Media Day. Head Coach Brian Kelly gave the media a breakdown of what is shaping up to be a season of great expectations.

The team's expectations are as high as winning a national championship. Kelly says this year's team could do it.

He says the team is more athletic and more physical than his 2012 squad that made it to the national championship.

"Maybe we don't have one singularly, superstar here or there but the depth of the group is a whole different football team than that group," Kelly said.

The 2015 team doesn't just boast experience and talent - Kelly says he has so many leaders he's not in a rush to name team captains.

"For me not naming them is not one of indecision, or that we don't have any. We have too many more than anything else," Kelly said.

Many of the players are some of the best in the country.

With a young and talented quarterback in Malik Zaire, it's no surprise Heisman chatter has already begun.

"If you win all of your games and you've got a really good quarterback, then I'm not worried about Notre Dame not having a Heisman trophy candidate," Kelly said.