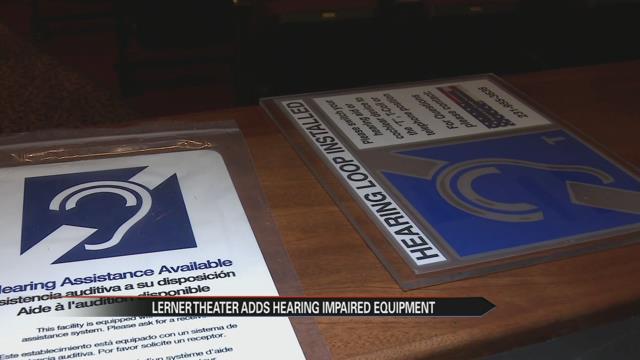 Changes are coming to the Lerner Theatre and it is not something you can see but it will make a world of a difference when you want to hear a show clearly.

On Tuesday Jay Miller, the Technical Director at the Lerner alongside a contractor American Loop Services, began to install a loop hearing system.

“I was at a show recently and had a rude awakening of what it’s like not being able to hear and it really ruined my experience,” says Miller.

Miller does not have any hearing issues but after his experience he is even more empathetic towards the Lerner patrons.

“I am that much more appreciative of what we are doing here to accommodate the people that have a hard time hearing,” says Miller.

The Lerner had a hearing system but it was not compatible with most hearing aids. The new system will work with close to 80% of all hearing aid brands.

“They will get the sound from the mic piped straight to their ear so it will eliminate all that background clutter and it’s literally like somebody talking in their ear,” says Scott Peyton, the owner of American Loop Services.

Peyton explains how it is simple for those with hearing aids to connect to the system but for the venue installing the system it is not cheap.

“The project here was in excess of $20,000 and we are giving a great majority of that,” says Marty Juel, Treasurer of the Elkhart Lions Club.

Juel says some club members brought up the hearing issues at the Lerner about a year ago.

After months of planning and fund raising this is a big accomplishment for the Lions Club.

“We want to improve the quality of life for people who come in here and want to enjoy a presentation or an event and now can do so just like a person who doesn’t have a hearing problem,” says Juel.

Microphones are also being installed to will help transmit sound to hearing aids for non-amplified shows like the symphony.

The loop audio system is also being installed at the Box office.

The installation process should be done by Friday just in time for the next show The Capital Steps on September 22nd.

Granger mother and daughter make masks for the community

US chief of naval operations to self-quarantine