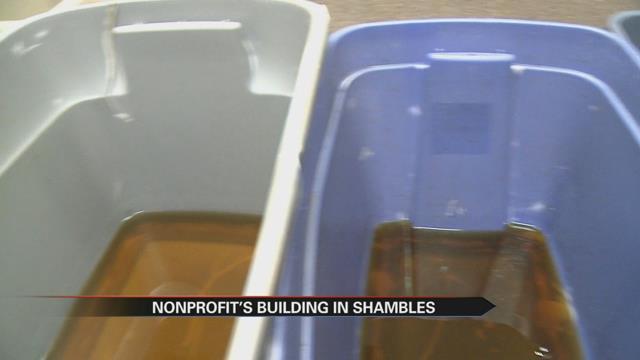 A contractor says extreme weather in Michiana is never a good thing for roof maintenance. The Shepherd’s Cove in Elkhart is experiencing the effects first hand.

“You can see the water,” says Sharlee Morain, Executive Director of the Shepherd’s Cove.

Water is exposed as she stomps her feet on the carpet.

The Shepherd’s Cove is a clothing pantry.

They share their building with, Michiana Five for the Homeless, another non for profit that collects blankets and non perishable food for the homeless.

“There are at least 50 leaks, at least. I am seeing drips down the walls, and they weren’t here last year. Those are all new leaks,” says Morain.

The Shepherd’s Cove has been closed since December.

Friday it will open for the first time this year.

Morain says the past few weeks of preparation have been disastrous.

“When we came back to get ready to open and I came back here to get a vacuum cleaner and this is where I lost it. This room was completely flooded,” says Morain.

This damaged box shows just how high the water was.

Morain says last year she was aware of three roof leaks and had a contractor come out.

“So I had a guy get up there and look at the roof and he told me you might have about five years left on it,” says Morain.

“With the weather being up and down so much in this area because you never know last week it was 60 degree weather and now it’s 20 degrees and six inches of snow on the ground,” says Marvin Berry, a service technician with roof contractors Lawnmasters.

Berry has worked on roofs for eight years in Michiana.

He says during this time of year the extreme weather does worsen many roofs.

“It’ll take the level of the life down sometimes and when the weather gets on it ice snow it freezes it causes it to expand and contract,” says Berry.

The flat roof at The Shepherd's Cove doesn’t mix well with the weather.

The setback the non-profit is facing is not entirely gloomy.

“We’ve moved everything so it did not get ruined,” says Morain.

Miraculously with dozens of leaks none of the donations were ruined.

“We are ready to go. We got all our racks full. We are not going to let this discourage us and shut down. We are serving a good purpose here and we are not giving up,” says Morain.

Morain estimates all the repairs will cost around $10,000.

For information on how to donate time or money to The Shepherd’s Cove click here.