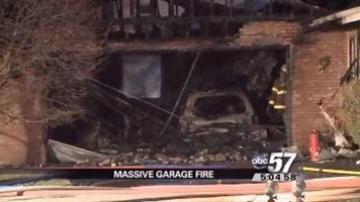 ELKHART, Ind. - A garage fire got out of control in Elkhart County.

One man saw smoke coming from his garage Thursday night. That's when he realized flames were shooting from the hood of his car

Before fire crews even got there the homeowner and neighbors grabbed hoses and extinguishers and tried to put it out, but it was too intense.

Three other fire departments were called in to help Cleveland Township.

It took 45 minutes to get the fire under control.

Crews had to step back at one point, because ammunition was going off from the heat.

Fire crews are trying to piece together how it all started.