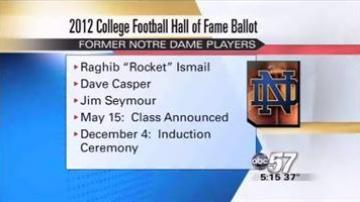 SOUTH BEND, Ind. -- Notre Dame may have even more players headed to the College Football Hall of Fame.

The 2012 ballot is in the mail. This year 76 players and eight former coaches made the list.

The former Irish who made the cut: Raghib "Rocket" Ismail, Dave Casper, and Jim Seymour.

The 2012 College Football Hall of Fame class will be announced May 15, and will be inducted December 4.