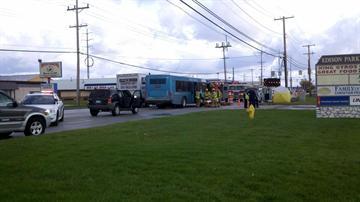 MISHAWAKA, Ind. -- Three people were sent to the hospital Thursday afternoon, following a collision involving a TRANSPO bus.  The Mishawaka police say that a TRANSPO bus was rear-ended by a 50-year-old woman driving a Ford Escape. Police say both vehicles were heading east on Edison, just before Grape.

There were five passengers and one driver on the bus. Three people have been taken to the hospital with non-life-threatening injuries. The woman driving the Ford Escape has been transported to Memorial Hospital.

Two passengers and the driver of the bus have been taken to St. Joseph Medical Center. There is no word on their injuries, but they are not believed to be major.

Another TRANSPO bus came to pick up the remaining passengers who were uninjured.

Traffic was tied up at the intersection for about 90 minutes.

Police say that traffic cleared at about 1 p.m.