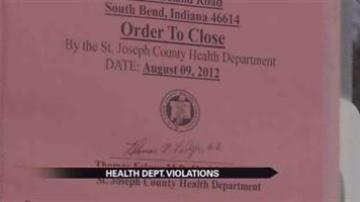 ST. JOSEPH, COUNTY, Ind. -- The St. Joseph County Health Department said it received several health complaints about three local restaurants. Health officials decided to pay those restaurants an unannounced visit and what they found was enough to shut all three down.

ABC 57 has been sifting through all the case files and below is the break down.

Two of the three restaurants were shut down for good, due to repeat violations. The owners have the chance to fix the problems, but at this time Rita Hooton with the Health Dept. said the owners of two of the three decided to throw in the towel due to steep violation fines and the cost associated with securing another permit.

Hooten is talking about what happened when the health department visited the Hibachi Grill Supreme Buffet on July 10 of this year. The restaurant is located in a Mishawaka shopping complex by the Indiana Toll Road off of Grape Road.

Some of the code violations in the inspection report were as stated: "for pans of cooked ribs stacked on top of each other with no barrier between. Pans of raw fish, stuffed mushrooms, cooked ribs, and ham measured above 50 degrees Fahrenheit (internal temperature) in two door reach-in refrigerators."

"Cold food is supposed to be kept cold, because salmonella tastes good. The conditions of the food prep area warranted enough to be enough to close the establishment due to public health concerns," said Hooton.

The Hibachi Grill Supreme Buffet was closed down until the July 18 hearing, and that's  when they were placed on probation for six months. During the probationary period the health department makes monthly unannounced trips to check if the restaurant is up to code.

When the health department stopped by the Supermexcado Santa Maria Mexican restaurant on Carlisle Street in South Bend on October 1, they found a dead mouse next to the produce and mouse droppings in a cupboard next to a counter.

A similar situation happened in May on the south side at New York Boys Pizza. The restaurant was placed on probation, yet when health inspectors paid the restaurant a visit they found the following: "Three dead mice and mouse droppings observed throughout the establishment, around the refrigerators, stockroom, inside cupboards, and all floors."

Hooton said fines escalated into the thousands for owners Moshe Guiben and Menchem Elbaum. The restaurant has been closed since the May 3rd date of inspection. However an official Health Department sign on the door dated August 9, 2012 said "order to close".

Back to the situation at Hibachi Grill Supreme Buffet in Mishawaka, Hooten said on Sept. 17 the health department showed up unannounced and found the restaurant in violation again. This time on 20 different codes. They shut down the establishment immediately and it couldn't reopen until after the Sept. 27 health department hearing date.

He wouldn't go on camera however he did issue the following statement, "Every single violation has been addressed and reconciled with employees and the health department. Proper food handling has been in place since the hearing. A restaurant operations consultant specializing in food handling and safety has been hired to work with staff for weekly training."

He also mentioned a handful of employees were let go who would not follow the state health department codes.

Hooten said, "the establishment has asked for a health department employee to do some monthly training so the employees can grasp what they need to do so they don't get in a situation where they are asked to close again."

If you would like to know how your favorite restaurant fared in its latest inspections visit the St. Joseph County Health Department on the 9th floor of the County City Building. You are required to fill out a form stating your name and why you would like the information. Each page you want to copy costs 10 cents.