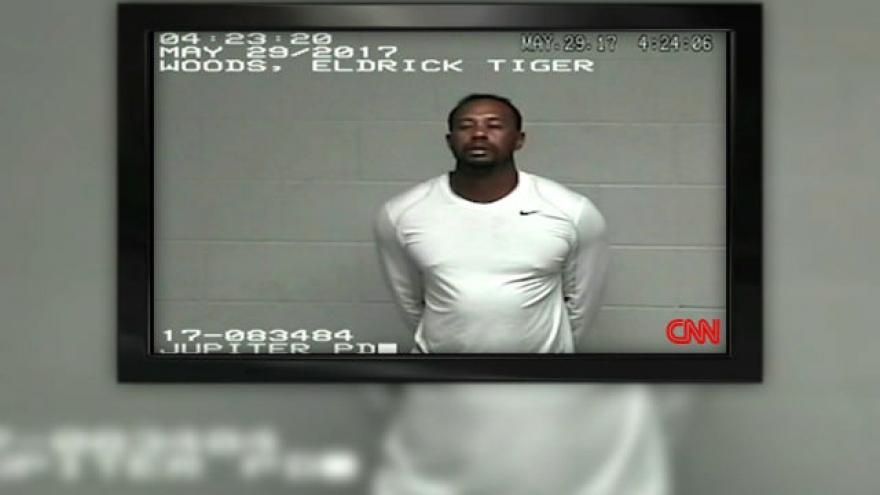 Golf legend Tiger Woods was arrested around May 29, 2017 on suspicion of driving under the influence. Photo courtesy Palm Beach Co. Sheriff\'s Office

(CNN) -- Golfer Tiger Woods had pain, anxiety and sleep medications, as well as THC, in his system when he was arrested on Memorial Day on suspicion of driving under the influence, according to a toxicology report released Monday by the Palm Beach County (Florida) Sheriff's Office.

A urine test revealed hydrocodone and hydromorphone, two opioid pain medications; alprazolam, prescribed for anxiety and panic disorders; zolpidem, a sedative prescribed for insomnia; and metabolites of alprazolam and of THC, the active ingredient in marijuana. Metabolites are what remains in the body after a person uses a drug.

"Recently, I had been trying on my own to treat my back pain and a sleep disorder, including insomnia, but I realize now it was a mistake to do this without medical assistance," Woods said in a statement Monday. "I am continuing to work with my doctors, and they feel I've made significant progress. I remain grateful for the amazing support that I continue to receive and for the family and friends that are assisting me."

The US National Library of Medicine warns against mixing alprazolam with either hydrocodone or hydromorphone, suggesting that the combination might lead to dizziness, lightheadedness, extreme sleepiness, slowed or difficult breathing, or unresponsiveness. In particular, hydrocodone plus alprazolam may increase the risk of "breathing problems, sedation, coma, or other serious, life-threatening side effects."

Police records indicate that Woods, 41, was found asleep on the side of a road in his 2015 Mercedes-Benz. The engine was running and the brake lights on, with the right turn signal flashing. The front and rear tires on the driver's side had gone flat, with both tire rims showing minor damage.

When he was awakened, Woods' speech was slurred. Dahscam video released by the police show him walking unsteadily when asked to get out of his car; shortly thereafter, he is unsure of what is happening to him. A Breathalyzer registered 0.000 for alcohol.

The police report noted that Woods was cooperative.

Woods said at the time of his arrest that alcohol was not involved and that he had "an unexpected reaction to prescribed medications."

In June, the golfer stated on Twitter that he was receiving "professional help" to manage his medications for back pain and a sleep disorder. In July, he said he had completed an out-of-state private intensive program.

Last week, Woods entered a DUI first-offender program, according to a representative for the state attorney in Palm Beach County.

The program typically calls for a defendant to plead guilty to a lesser charge of reckless driving, but no plea was entered on behalf of Woods. His arraignment is set for October 25.

Woods has won 14 major tournaments, second only to Jack Nicklaus. The golfer hasn't played competitively since he withdrew from the Dubai Desert Classic in February due to back spasms.

He underwent fusion surgery on his back this year, his fourth operation since 2014. Woods wrote that "it was instant nerve relief" in a post on his website May 24.

Woods said Monday, "Regarding my back, I recently spoke to my surgeon and he's very pleased with how my fusion is healing. I'm right on schedule. I'm now doing some light lifting, riding a stationary bike and putting a little."

Despite his injuries and pain, he has expressed a desire to continue to play golf professionally.