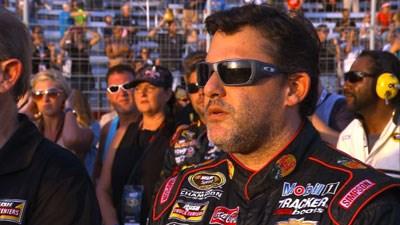 (CNN) -- Three-time NASCAR champion Tony Stewart is being sued by the parents of a race car driver killed last year during a break in a dirt-track race in upstate New York, the plaintiffs' lawyers announced Friday.

Kevin Ward Jr. was killed August 9 after he got out of his wrecked sprint car and went to confront Stewart during a yellow flag caution period at Canandaigua Motorsports Park. After one car narrowly missed Ward, Stewart drove by and Ward was struck by the right rear tire of Stewart's car and slung down the track.

Ward, 20, died of massive blunt trauma as paramedics drove him to a hospital.

His parents, Kevin and Pamela Ward, filed a wrongful death suit asking for unspecified financial compensation. The suit was filed in Lewis County, where the family lives.

Stewart was not criminally charged in the incident. On Friday, Stewart was practicing 175 miles away for a NASCAR Sprint Cup race at Watkins Glen International race track on Sunday, an event he skipped last year after Ward was killed. He also skipped the next two NASCAR events.

In September a district attorney in Ontario County, where the on-track incident occurred, said he thought the fact that Ward came down the track into an area where cars were still moving played a big factor in the grand jury's decision not to indict Stewart. District Attorney Michael Tantillo also said video showed there were no aberrations in Stewart's driving.

But the Ward family disagreed.

In their court filing they blame Stewart, saying he failed to drive safely as he approached Ward and that he gunned the engine, causing the car to slide into their son.

"Kevin Ward would be alive today if not for the reckless and dangerous actions of Tony Stewart, who eventually will have to answer for what he did," said attorney Mark Lanier in a news release. "The past year has been extremely difficult for Kevin's mother and father, and they're still trying to cope with their unimaginable loss."

Though his racing fame came from asphalt ovals, Stewart loved to race on dirt tracks and would often find a race close to the NASCAR events. It wasn't unusual for him to be a guest among the regular drivers at the short and quick dirt races.

Ward was the Empire Super Sprint series rookie of the year in 2010. During the race last year the two drove closely on the 14th lap of the 25-lap main event.

With Stewart on the inside, the two cars were involved in a racing incident that left Ward's car wrecked near the top wall of the track. The 20-year-old driver walked quickly down the track, apparently looking for Stewart.

One car avoided hitting Ward but as Stewart passed close by, his car's tire struck Ward, slinging him 25 feet down the track.

Tantillo said in September that Ward was under the influence of marijuana that night, enough to impair his judgment.

Stewart said last year the incident was "100 percent an accident."