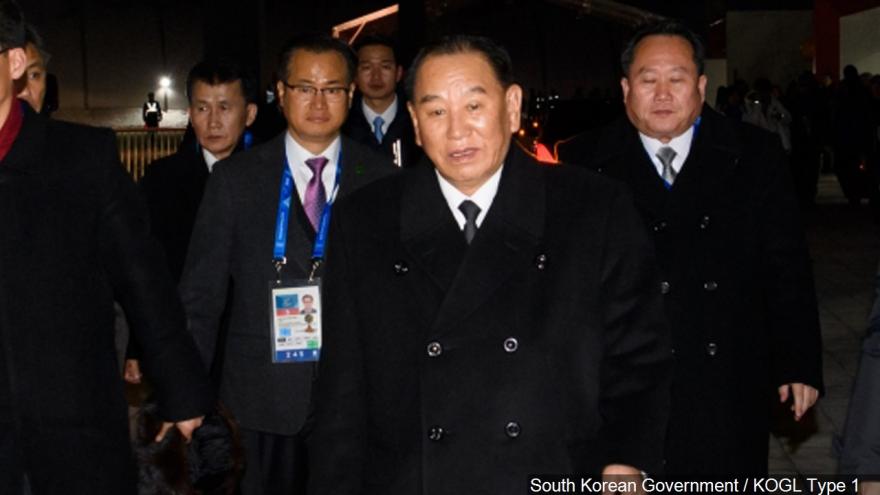 (CNN) -- One of North Korean leader Kim Jong Un's top officials is traveling to the United States and will meet Secretary of State Mike Pompeo as the two countries lay the groundwork for on-again, off-again talks between Kim and US President Donald Trump in Singapore on June 12.

Trump himself confirmed the news of Kim Yong Chol's trip to the US early Tuesday, tweeting: "We have put a great team together for our talks with North Korea. Meetings are currently taking place concerning Summit, and more. Kim Young Chol, the Vice Chairman of North Korea, heading now to New York. Solid response to my letter, thank you!"

Kim will meet with Pompeo later this week, according to White House press secretary Sarah Sanders.

Once he touches down on American soil, Kim would be the most senior official to visit the United States since 2000, when Vice Marshal Jo Myong Rok traveled to Washington to meet with former US President Bill Clinton in the Oval Office. Then-US Secretary of State Madeleine Albright traveled to North Korea later that month.

His trip comes as the United States and North Korea attempt to revive the summit, a potential diplomatic triumph for two countries technically still at war.

The talks nearly fell apart last week when Trump said he was calling off the June 12 meeting in Singapore, following incendiary comments from a senior North Korean foreign ministry official who called Vice President Mike Pence a "political dummy." The White House also said in a background briefing that North Korean officials hadn't answered their calls, frustrating their attempts to plan for the meeting.

But after a conciliatory statement from North Korea, Trump revived hopes for the meeting late Saturday night. Over the weekend Kim Jong Un called an impromptu meeting with South Korean President Moon Jae-In at the Demilitarized Zone and reiterated his commitment to denuclearizing.

Kim Yong Chol and Kim Jong Un's sister, Kim Yo Jong, have been two of the most visible and important players in Pyongyang's push for rapprochement with South Korea and the United States this year.

Kim Yong Chol's trip to the US indicates that Washington and Pyongyang have direct lines of communication open and are working closely together to work though issues ahead of the summit.

Pyongyang's foreign ministers regularly travel to New York to address the United Nations General Assembly, but this will be a much higher level presence with Kim Yong Chol's appearance at the international body headquarters.

"There is a power going to enemy territory. The act itself builds confidence on both sides," said John Delury, a professor of international relations at Yonsei University's Graduate school of International Studies.

"It shows a healthy process of the two sides working with sincerity to fundamentally change the relationship."

Kim Yong Chol is the vice chairman of North Korea's Party Central Committee, and is Kim Jong Un's top official in charge of relations between North and South Korea. He's often pictured with the North Korean leader and attended his two recent meetings with South Korea's President Moon at the DMZ that divides the two Koreas.

Kim Yong Chol has already met at least one senior US official. He was pictured greeting US Secretary of State Mike Pompeo when the former CIA director visited Pyongyang earlier this month.

Kim Yong Chol was part of the delegation from the North that traveled South in February for the Winter Olympics closing ceremony, a decision that surprised many consideringhe was believed to have masterminded the sinking of a South Korean navy ship in 2010 that killed 46 sailors while serving as North Korea's top intelligence official.

The White House has dispatched officials across the globe to prepare for the possible summit.

A team of US officials traveled to North Korea Sunday for talks with their North Korean counterparts. The team from Washington includes Sung Kim, a former US ambassador to South Korea and special representative for North Korea policy; Randall G. Schriver, the assistant secretary of Defense for Asian and Pacific Security Affairs; and Allison Hooker, director for Korea on the White House's National Security Council.

Representatives from Washington and Pyongyang have also been sent to Singapore, the island city-state that has agreed to host the talks, the first between a North Korean leader and sitting US President.

The diplomatic scramble follows a last-minute meeting between Kim and Moon on the northern side of the DMZ Saturday to discuss the next steps after Trump's surprise cancellation.

As Moon revealed the substance of their discussion in a press briefing Sunday, President Trump announced that the meeting was back on.

"We're looking at June 12th in Singapore. That hasn't changed."

Moon told reporters Kim requested the meeting with him on Friday afternoon, in what was only the fourth encounter between the leaders of North and South Korea.