Toronto police delving into life of gunman in mass shooting 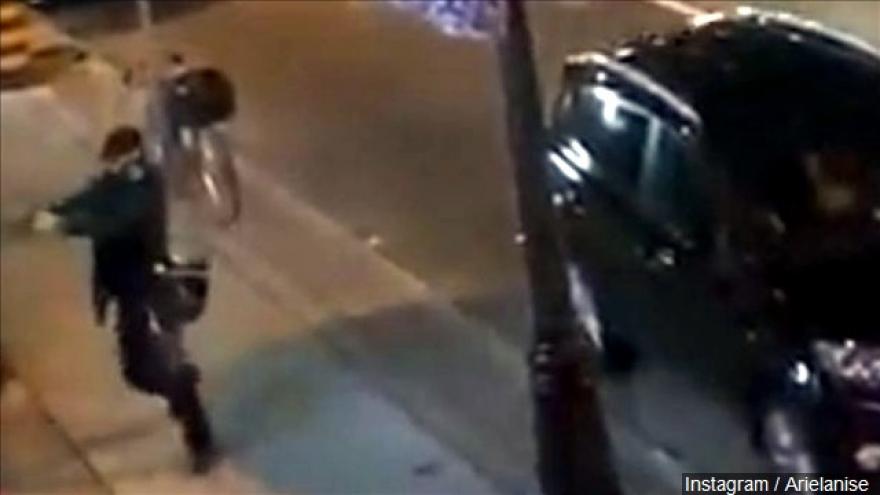 A gunman, identified as Faisal Hussain, can be seen firing into a restaurant in Toronto\\\'s Greektown neighborhood. Two people were killed and 14 were injured in the shooting. Photo courtesy Instagram / Arielanise 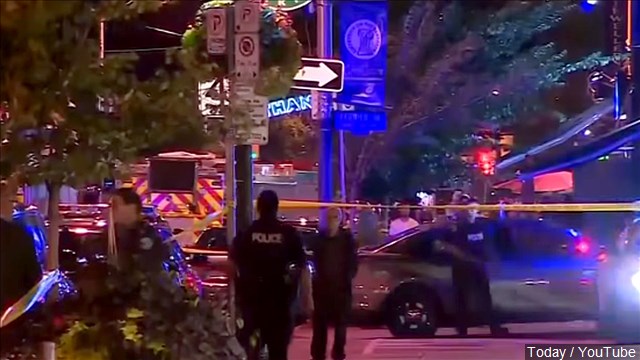 The crime scene where a mass shooting occurred in Greektown of Toronto, Canada. Today / YouTube

TORONTO (AP) — Investigators are digging into the life of a 29-year-old man trying to explain what prompted him to fire a handgun into restaurants and cafes in a lively Toronto neighborhood, killing a 10-year-old girl and an 18-year-old woman and wounding 13 others.

The family of Faisal Hussain, who died during an exchange of gunfire with police, said Monday that he had long suffered from psychosis and depression but they never imagined this would be his fate. It was not immediately clear whether he took his own life or was killed by police during the rampage Sunday night.

The mass shooting in the Greektown district came just three months after a man used a van to plow over pedestrians on a sidewalk in another Toronto district, killing 10 people and injuring 14 in an attack apparently aimed at women.

A statement from Hussain's relatives said he had lifelong "severe mental health challenges." They said medications did not help him and the interventions of professionals were unsuccessful.

"While we did our best to seek help for him throughout his life of struggle and pain, we could never imagine that this would be his devastating and destructive end," the family said.

"Our hearts are in pieces for the victims and for our city as we all come to grips with this terrible tragedy. We will mourn those who were lost for the rest of our lives."

Investigators searched the low income east end apartment that Hussain shared with his parents and siblings on Thorncliffe Park Drive in the east end of the city.

Police Chief Mark Saunders said he would not speculate on a motive but did not rule out terrorism.

"We do not know why this has happened yet," he said. "It's going to take some time."

The slain 18-year-old was identified as Reese Fallon, a recent high school graduate who volunteered for Canada's Liberal party and was due to attend McMaster University in the fall. Her family said in a statement they were devastated.

"She was ... smart, passionate and full of energy. It is a huge loss," said Nathaniel Erskine-Smith, a member of Parliament who knew Fallon.

Flags at Toronto City Hall as well as at Fallon's former high school, Malvern CI, were lowered to half-staff.

"An engaging student, Reese Fallon graduated from Malvern CI just last month and was highly regarded by staff and loved by her friends," the school board said in a statement, adding that support was being offered to students.

The 13 wounded ranged in age from 10 to 59, and suffered injuries ranging from serious to minor, Saunders said. Officials did not identify the 10-year-old who was killed or name any of the wounded, who included six women and girls and seven men.

A video taken by a witness showed a man dressed all in black walking quickly down a sidewalk and firing three shots into at least one shop or restaurant in Greektown, a residential area of million-dollar homes that is crowded with restaurants and cafes.

Witnesses heard many shots and described the gunmen walking along Danforth Avenue firing into restaurants, cafes and patios on both sides of the street.

At the corner of Danforth and Logan, where some of the shots were fired, about 50 people milled about on a small square Monday evening, talking in several languages. They expressed shock at a shooting in such a neighborhood, which is graced with parks, pretty two-story brick homes and street cafes.

Some hugged, others wept. Others were somber, wondering both why someone would want to hurt people in their neighborhood — and how he obtained a gun in a country with far stricter gun laws than in the neighboring U.S.

Bouquets of flowers lay near a plaque commemorating the city. A few steps away, people signed a makeshift memorial made of plywood reading: "we are Danforth strong," a reference to the neighborhood's main street.

"I'm out of my mind just thinking about it. It's Toronto," said Augustino Speciale, who paused to smell a bouquet of white lilies attached to a lamppost.

Ontario's police watchdog said there was an exchange of shots between the attacker and two officers on a side street before the gunman was found dead.

Jody Steinhauer was celebrating her birthday with family at Christina's restaurant when they heard 10 to 15 shots. They ran to the back to the restaurant and hid under a table.

"We heard a woman yell, 'Help!' My partner went outside the restaurant and the woman was right there. She had been shot," she said.

Her boyfriend and a doctor who was in the restaurant attended to the woman who was shot in the thigh. "She was screaming and yelling and in shock. Nobody was with her. That was the scary part," Steinhauer said.

Though mass shootings are rare in Canada's largest city, Toronto police had deployed dozens of additional officers over the weekend to deal with a recent rise in gun violence in the city, which has seen 23 gun homicides so far this year, compared to 16 fatal shootings in the first half of 2017.

Toronto has long prided itself as being one of the safest big cities in the world.

"We were so used to living in a city where these things didn't happen and as we saw them going on in the world around us (we) thought they couldn't happen here," Mayor John Tory said. "This is an attack against innocent families and our entire city."