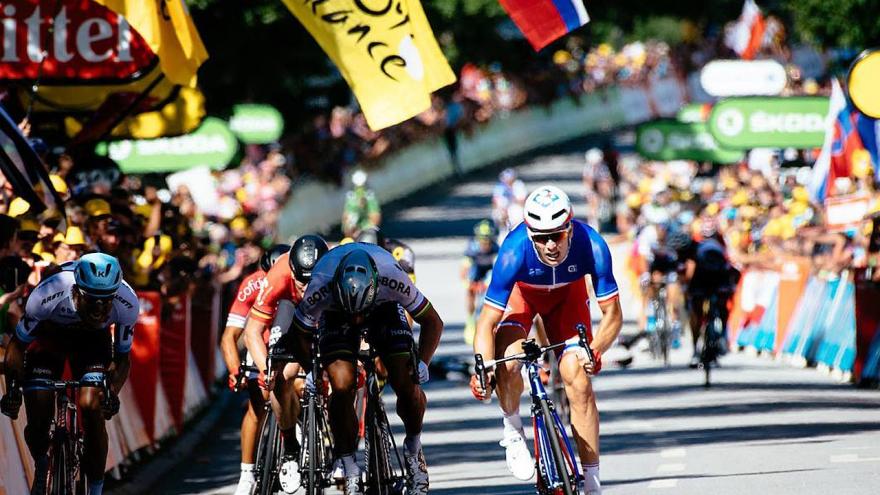 (CNN) -- It goes without saying that cycling fans flock to the French roads and mountains in their millions to catch a glimpse of the world's best riders -- some of the toughest athletes on the planet -- compete in the Tour de France.

But there is one other attraction of the race that gets those standing roadside to scream almost as loudly: The publicity caravan -- La Caravane Du Tour.

The brainchild of Tour founder Henri Desgrange, the caravan was designed in an attempt to divert teams away from being run by individual cycling brands and instead be raced by national teams.

Each rider would be equipped with the same bicycle supplied by the organizers. But how would they cover the costs? Step forward Desgrange and his revolutionary caravan.

Backed by many of France's biggest brands, the caravan was a hit -- and its popularity hasn't waned.

Not only did Desgrange come up with an ingenious way to fund his new Tour format, he inadvertently went on to create what is now one of the integral parts of the modern Tour.

According to the official Le Tour website, 47% of fans come primarily to see the caravan.

Preceding the race at each stage, the 45-minute parade -- winding through all of the Tours 3,540 kilometers -- provides those standing roadside with entertainment and freebies.

In 2016 alone, brands handed out 14 MILLION giveaways to grateful bystanders -- up to 12 million fans line the roads during the race -- while 600 people were needed to ensure the 170-vehicle parade ran smoothly.

History of the Tour de France

There have been four cyclists who have won the tour five times:

Lance Armstrong held the record for most Tour de France wins (seven) but he was stripped of those wins in 2012.

France has won more times than any other country. (36)

1903 - Maurice Garin of France is the first cyclist to win the race.

1910 - First time the race goes through the Pyrenees.

September 20, 2007 - Floyd Landis, winner of the 2006 Tour de France, is stripped of his title when an arbitration panel rules in favor of the USADA (US Anti-Doping Agency). Landis, the first Tour de France winner stripped of the title, initially maintained his innocence but later admitted to doping and accused others, including Armstrong, of doing the same.

October 22, 2012 - The International Cycling Union announces that Armstrong is being stripped of his Tour de France titles and is being banned from professional cycling for life.

October 26, 2012 - The International Cycling Union announces that no one will be declared the winner of the Tour de France from 1999-2005, after Armstrong is stripped of his titles.