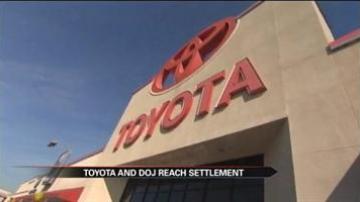 The Department of Justice and Toyota have reached a settlement over deadly accidents caused by unintended acceleration.

This could be the largest criminal penalty against a car company in the history of the United States.

Toyota is accused of delaying its handling of sticky gas pedals and runaway vehicles which were linked to five deaths and led to a recall of more than 10-million cars.

The Justice Department says the auto-maker put profits ahead of safety by covering up the defect.

"Other car companies should not repeat Toyota's mistake: A recall may damage a company's reputation, but deceiving your customers makes that damage far more lasting," said Attorney General Eric Holder.

Toyota is paying more than a billion dollars.

The Justice Department will hold off prosecution for three-years provided that Toyota continues to cooperate with federal authorities.