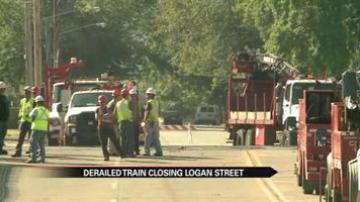 MISHAWAKA, Ind. -- A freight train headed to Chicago derailed just before midnight Monday in Mishawaka and damaged the train tracks. Crews are working to repair the tracks and road, but it will take a couple weeks to complete.

The train was carrying scrap metal.

Because of the damage to the road and track, Logan Street, between Jefferson Boulevard and Marion Street, is closed.

"Today and for the rest of the week crews are going to be working to replace that crossing way," said Patrick Waldron, spokesman for Canadian National.

A statement from Canadian National says the area might not re-open until October 15th.

But they say they will work as quickly as they can…

"We apologize for the inconvenience. There will have to be some alternate routes for motorists during the rebuild," said Waldron.

"This has been kind of a nightmare for us this morning," said Toner.

We informed her the street isn't expected to open for another three weeks.

"Scary. Because that means we have to call all of our clients to inform them," said Toner.

Driving in the area will be tricky for the next several weeks. Through traffic will be detoured using McKinley Avenue, Ironwood Drive, and Lincolnway.