We now have a named storm in the northern Gulf of Mexico. Late Thursday morning, the National Hurricane Center officially declared Tropical Storm Barry with winds of 40 mph and gusts to 50 mph. 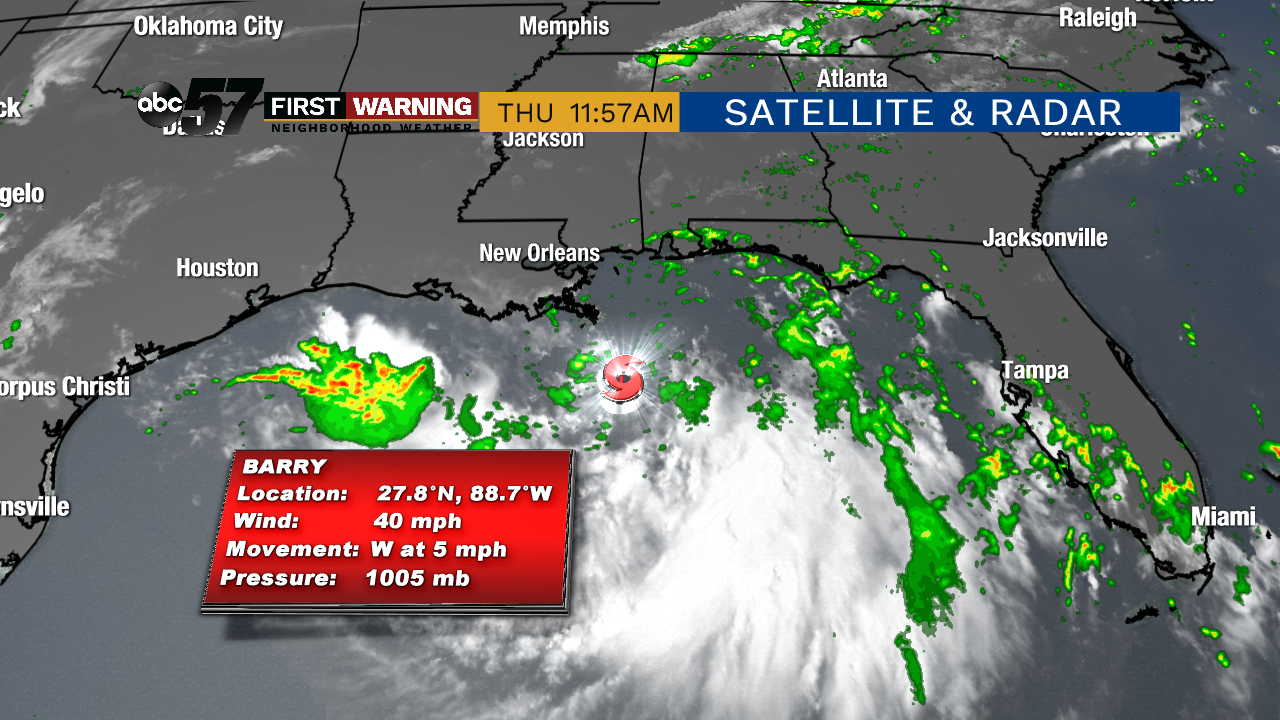 Tropical Storm Barry as of 12 p.m. EDT Thursday.
The system is still slightly disorganized, but conditions are favorable for rapid strengthening Thursday and Friday before landfall occurs Saturday morning somewhere along the Louisiana coast. By that time, Barry is expected to reach category one hurricane strength with maximum winds of 75 mph. 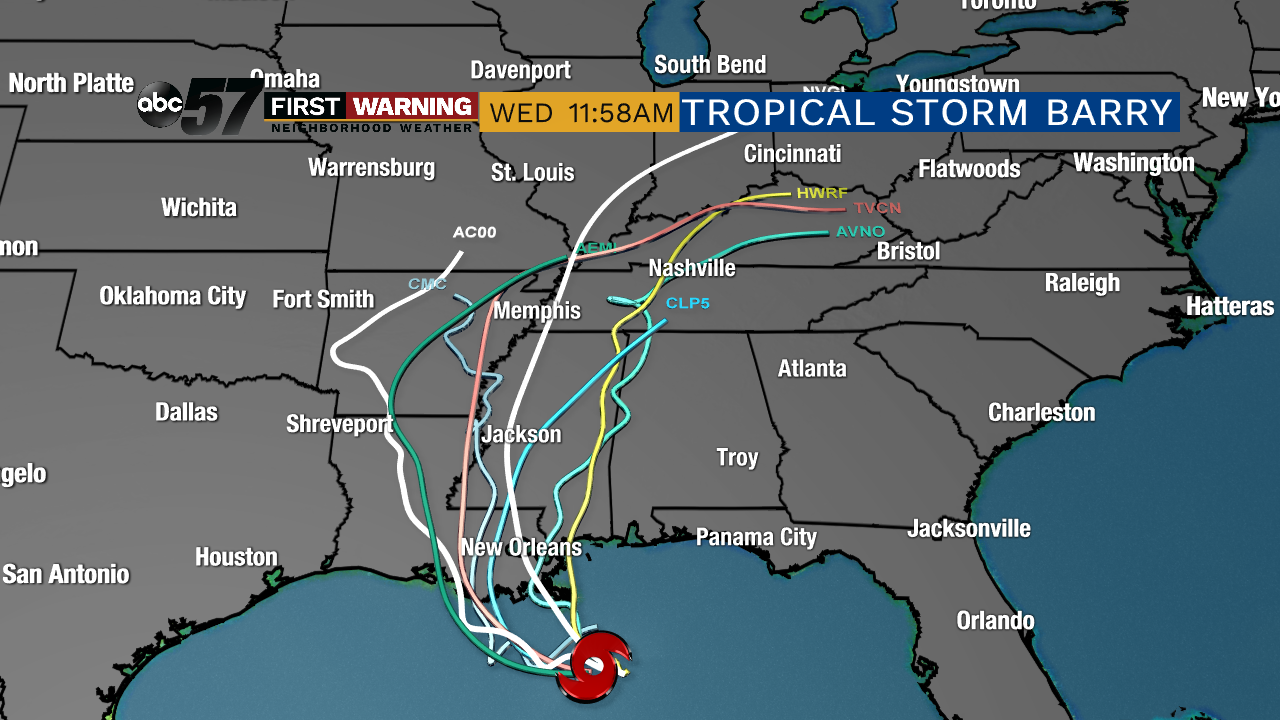 Spaghetti plots for Barry.
Nearly every forecast model takes the center of Barry through the eastern half of Louisiana before pushing north roughly along the Mississippi River. After that, it's possible the remnants of the system ride along the Ohio River into early next week.

It's not out of the question our weather is influenced at least somewhat from Barry's remnants by the middle of next week in the form of an elevated chance of showers and storms. That remains to be seen, but we do know Barry will just add to the tropical heat and humidity expected throughout next week. 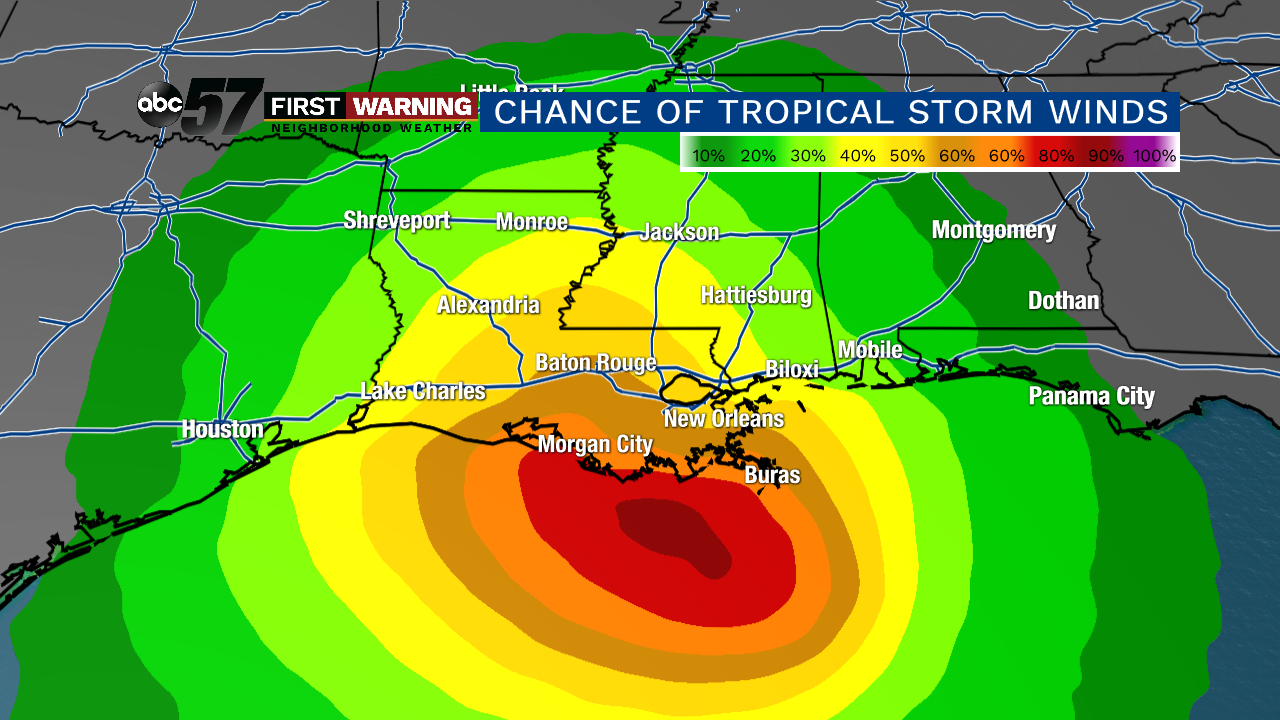 Probability of tropical storm force winds.
Wind could be a significant issue with this storm, but only over a localized area. Wind will not be the main concern, but the chance of at least tropical storm-force wind gusts is high in Louisiana. That would be winds between 39 mph and 73 mph. According to the National Weather Service, snapped and uprooted trees, scattered structural damage and scattered power outages are expected. That is why there are Tropical Storm Watches, Tropical Storm Warnings and Hurricane Watches in effect. 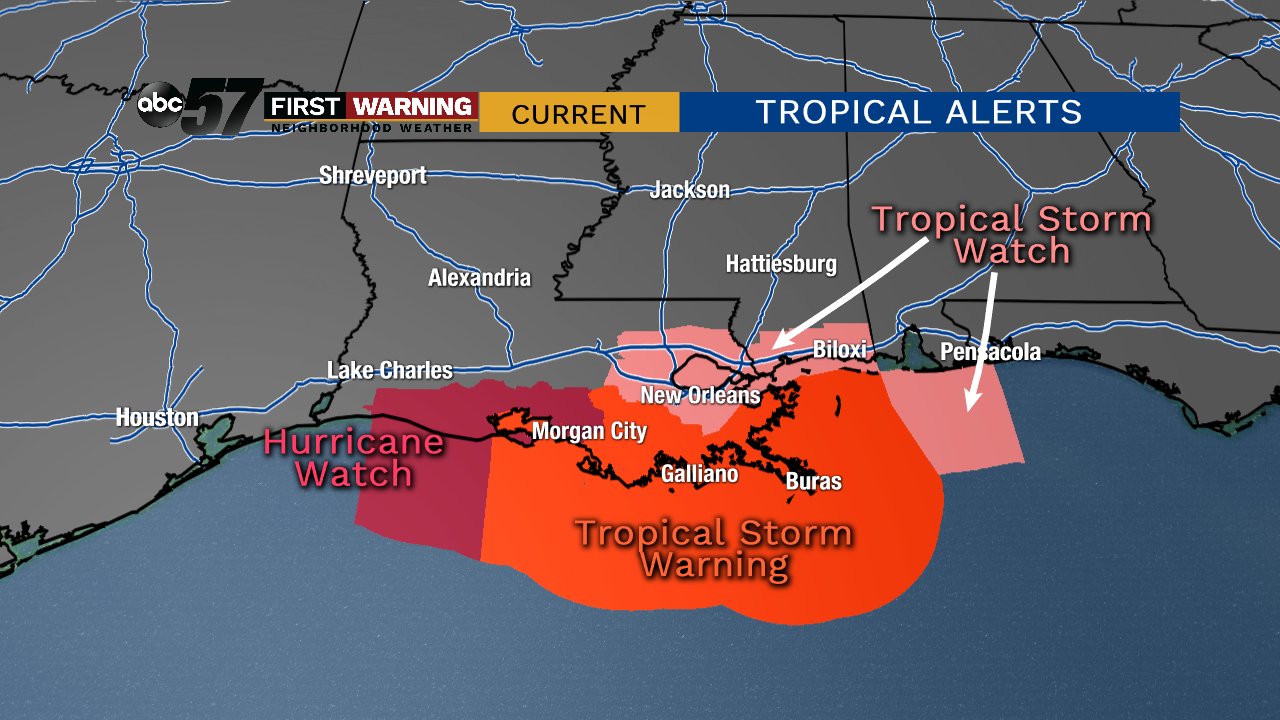 Tropical storm and hurricane alerts as of 12 p.m. Thursday.
Other concerns include storm surge, dangerous and life-threatening surf, heavy rain and flooding, and isolated tornadoes. Flash Flood Watches and Storm Surge Watches and Warnings are in effect for parts of Louisiana and Mississippi in anticipation of extreme rainfall and a couple to a few feet of storm surge. 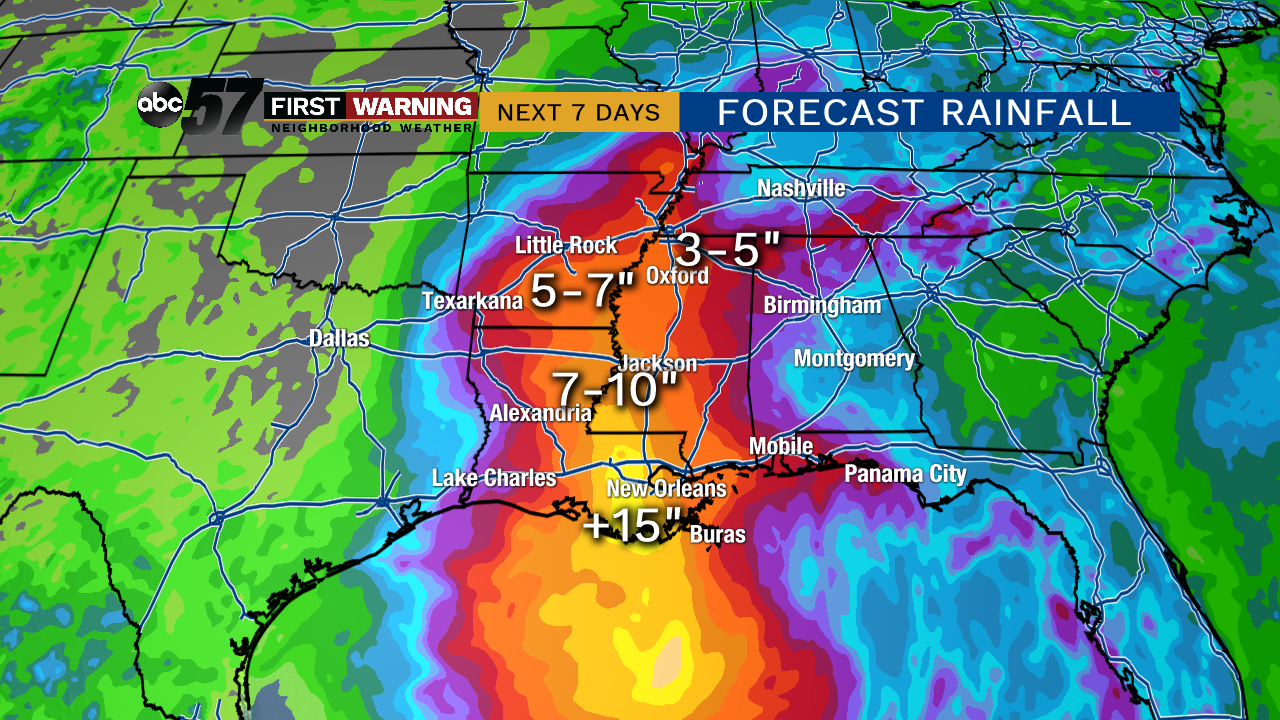 Forecast total precipitation. WPC
Current outlooks project total rainfall of 10-20" in parts of eastern Louisiana with 7-10" expected into Mississippi. Heavy rain and some flooding rain are possible all the way to southeastern Missouri, southern Illinois, western Kentucky, and southern Indiana.

But significant impacts do not look likely for Michiana. At this time, there is a chance of rain and storms during the middle of next week, but any sort of prolonged heavy rain event is unlikely.

What we could see are increases in gas prices, though. According to CNN, U.S. oil has eclipsed $60 a barrel due to concern over Barry derailing crude production in the Gulf of Mexico. Patrick DeHaan, the head of petroleum analysis for GasBuddy, tweeted the following Wednesday evening:

#GasPrices will likely continue to rise and we’re keeping a watchful eye over Barry for potential local or regional disruptions to the flow of fuel products, no reason to panic, prices will continue to rise nearly nationwide as oil hits nearly $61/bbl.

According to the Bureau of Safety and Environmental Enforcement, personnel from 15 production platforms and 4 rigs in the Gulf of Mexico have been evacuated. That is as of 12:30 p.m. EDT Thursday. Additional evacuations and rises in oil costs are possible as Barry continues to develop and strengthen off the coast of Louisiana.