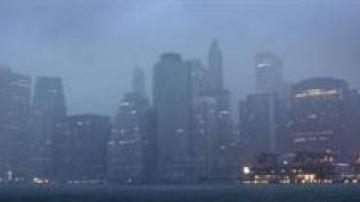 Hurricane Irene made landfall in Coney Island, N.Y. at 8:45 a.m. as a tropical storm with winds at 65 mph, but patches of blue are peaking through the sky in lower Manhattan.

Tornado warnings have been issued in the New York City and southern New England regions asIrene moves up the east coast of the United States leaving a path of debris and destruction that has claimed at least nine lives so far.

A significant increase in the forward speed of the storm is expected and the storm's passage will be accompanied by heavy rain fall and possible tornadoes. Forecasts indicate Irene will weaken after landfall in New England and become a post-tropical cyclone tonight or early Monday.

At least 3.1 million homes and businesses are without power while thousands have been evacuated from their homes and approximately 9,600 residents in New York City are currently in evacuation shelters as Irene moves north at maximum sustained winds reaching 80 miles per hour.