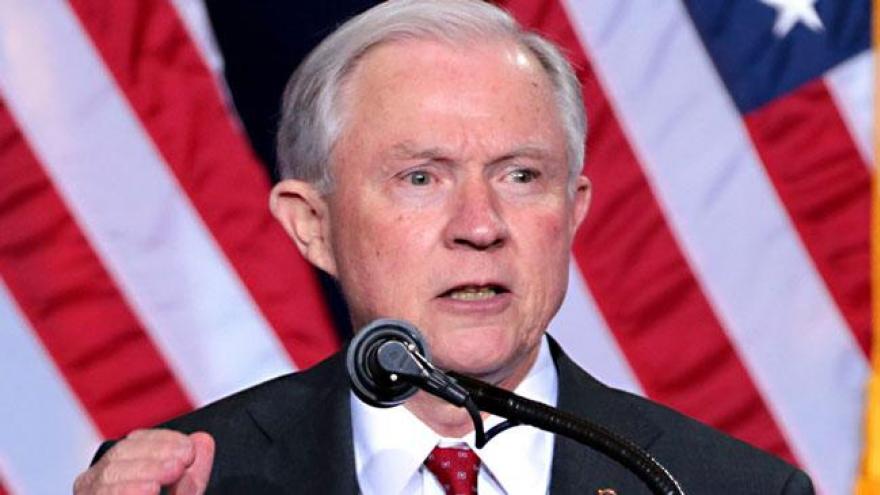 WASHINGTON (CNN) -- The Justice Department announced Tuesday it would take further steps to up prosecutions against undocumented immigrants -- the latest in a series of steps by the Trump administration to more aggressively enforce immigration laws.

Attorney General Jeff Sessions traveled to the US-Mexico border at Nogales, Arizona, to make the announcement with Customs and Border Protection personnel, calling the measures a move against "filth" like gangs and "criminal aliens."

"It is here, on this sliver of land, where we first take our stand against this filth," Sessions said, according to a copy of his speech from the Justice Department.

In sum, the measures could substantially increase the number of cases brought against undocumented immigrants, and escalate the nature of charges brought against them, also raising the stakes for the appointment of US attorneys in border districts.

Sessions also issued a memo to federal prosecutors that would up charges against undocumented immigrants. Among the measures was more heavily prosecuting smugglers and traffickers under statutes against transportation and harboring, prosecuting more cases of fraud and identity theft, and more aggressively going after people who enter the US illegally.

Sessions ordered all border district US attorneys to begin making felony cases against individuals who illegally enter the US and have done so two times prior, or have gotten a misdemeanor for doing so once before and have other "aggravating circumstances" like gang convictions.

He also instructed the border districts to put together guidelines on charging first-time crossers with misdemeanors, paving the way for future felonies.

One way this could quickly impact undocumented immigrants is in the prosecution of identity theft or fraud-type charges, as they often use fake Social Security numbers or documents to enter, live and work in the US. The policy makes no attempt to distinguish between types of fraud or offer aggravating circumstances that would make prosecutions more likely.

Taken together, the moves could substantially increase the number and seriousness of charges brought against undocumented immigrants, which would then pave the way for more deportations and detentions.

Similar policies were in place under the George W. Bush administration, when certain border districts aggressively prosecuted first offenses to up the charges on second entries. Those prosecutions were continued into the first part of the Obama administration, though scaled back in the last few years of his presidency.

While not a drastic departure from previous efforts to combat illegal immigration and in keeping with other efforts made by this administration, former Obama Justice Department official Leon Fresco, now an immigration attorney, says that the execution will matter, especially if the guidelines from the Justice Department don't exempt legitimate asylum seekers from prosecution until their cases are decided.

While the Department of Homeland Security drives apprehension, detention and deportation proceedings of undocumented immigrants, the Justice Department handles criminal prosecutions and the immigration courts, including appointing judges.

Trump has also received resignations from all the US attorneys across the country, meaning he will now be able to hand pick the prosecutors who will implement Sessions' memo at the border.

Sessions also announced Tuesday that the department would surge the number of immigration judges -- a move that advocates and immigration enforcement supporters alike recognize would alleviate the pressure on the immigration courts.

One of the major factors that contribute to the "catch and release" issue that Trump has pledged to end is the long wait time to hear immigration cases, sometimes several years. Individuals in the Obama administration would be given probation during that time, and some would build lives in the US in the meantime.

More judges could move cases more quickly through the courts. And with the increased detentions policy of the Trump administration, could also relieve crowding in the facilities.

Sessions said he hopes to streamline hiring to get 50 judges in place this year and an additional 75 in place next year.