Trump condemns 'hatred, bigotry and violence on many sides' in Charlottesville 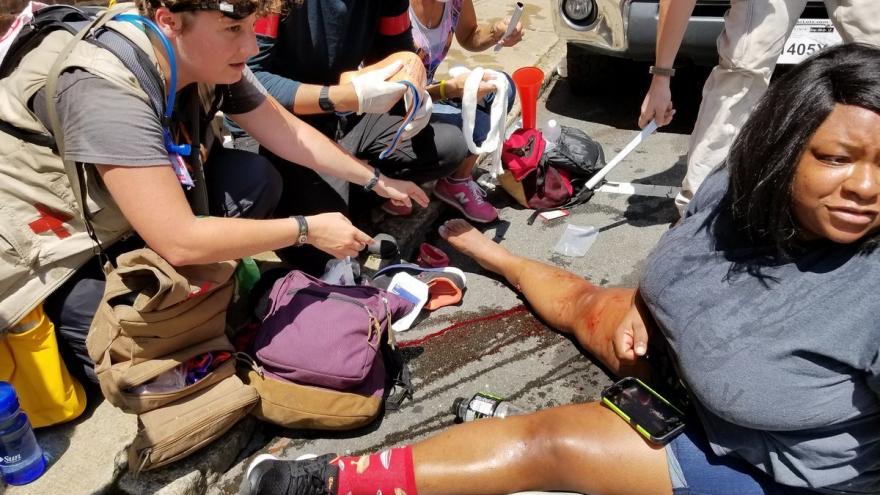 The President did not mention white nationalists and the alt-right movement in his remarks, and later called for a "study" of the "situation."

At least one person was killed and 19 injured when a speeding car slammed into another car that was navigating through a throng of counterprotesters, according to a statement released on the City of Charlottesville's verified Twitter account.

Trump billed the event as a press conference but failed to take any questions on Saturday. Reporters attempted to ask the President whether he condemns white nationalists or if he considers the car slamming into counterprotesters terrorism. Trump, in the past, has been quick to label foreign events terrorism and has slammed fellow politicians for not quickly labeling attacks as terrorism.

At one point the President also touted economic improvements, saying the nation's unemployment rate was the lowest in 17 years. Trump said he was dismayed by the violence: "we have so many incredible things happening in our country, so when I watch Charlottesville, to me it is very, very sad."

Trump closed his remarks on Charlottesville urging people to remember "no matter our color, creed, religion or political party, we are all Americans first."

Earlier Saturday, Trump, who is on his 17-day vacation in New Jersey, urged people to "come together as one" in response to the protests but did not explicitly mention the white nationalist origins of the conflict.

"We ALL must be united & condemn all that hate stands for," he wrote on Twitter. "There is no place for this kind of violence in America. Lets come together as one!"

Trump, who also signed a Veterans Affairs health care bill Saturday afternoon, later tweeted: "Am in Bedminster for meetings & press conference on V.A. & all that we have done, and are doing, to make it better-but Charlottesville sad!"

Demonstrators clashed on the streets of Charlottesville on Saturday morning ahead of a white nationalist rally, with counter-protesters and right-wing nationalist groups converging on the college town in the latest chapter in the United States' debate over race and identity.

The protests were precipitated by the city's government deciding to remove symbols of its confederate past, including a statue of Confederate Gen. Robert E. Lee. Similar protests happened in May when New Orleans officials decided to remove confederate statues.

"I stand with @POTUS against hate & violence," he tweeted. "U.S is greatest when we join together & oppose those seeking to divide us. #Charlottesville."

First lady Melania Trump also tweeted 45 minutes before her husband that "our country encourages freedom of speech, but let's communicate w/o hate in our hearts. No good comes from violence."

Trump is in the midst of a working vacation at his private golf club in Bedminster, New Jersey, a trip that has so far been consumed by roiling tensions on the Korean Peninsula. Trump's time away from the White House has been anything but calm, with the President consistently responding to threats from North Korean leader Kim Jong Un, who has threatened to launch missiles near the US territory of Guam.

Bossert, who is with the President in New Jersey, tweeted Saturday that "the violence and hate in Charlotte (sic) are unacceptable."

"Protests must not undermine law and order," he said. "Confidence in state/local law enforcement."

White nationalist groups who have come to be known at the "alt-right" drafted off Trump's candidacy in 2016 and rose to national prominence by tying themselves to Trump's message.

On Saturday in Virginia, according to a video posted on Twitter by a photojournalist from The Indianapolis Star, David Duke -- a prominent former Ku Klux Klan leader who ran for Senate in Louisiana in 2016 -- tied the protests in Virginia to Trump.

Duke slammed Trump's response to the protests on Saturday, tweeting that Trump should "take a good look in the mirror & remember it was White Americans who put you in the presidency, not radical leftists."

"So, after decades of White Americans being targeted for discriminated & anti-White hatred, we come together as a people, and you attack us," Duke wrote.

Trump drew flack from critics and Democrats during the campaign for not fulsomely disavowing the alt-right and white supremacists.

After the election, in a November 2016 interview with The New York Times, Trump disavowed the movement and said he did not intend to energize the group.

"I don't want to energize the group, and I disavow the group," Trump told a group of Times reporters and columnists during a meeting at the newspaper's headquarters in New York.

He added: "It's not a group I want to energize, and if they are energized, I want to look into it and find out why."