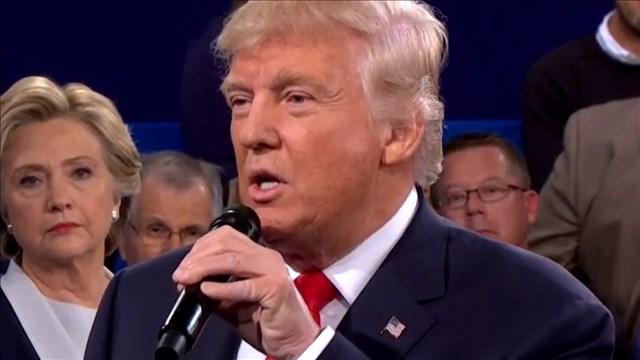 PORTSMOUTH, New Hampshire (CNN) -- Donald Trump continued to warn his supporters Saturday that he believes the election is "rigged," refuted allegations he groped and kissed women without their consent as "total lies" and argued they are part of a conspiracy to keep him from the presidency.

Trump also argued, once again, that Democratic rival Hillary Clinton "should have been prosecuted" and "be in jail" for her improper use of a private email server at the State Department. She escaped prosecution, Trump alleged, because of collusion between the Clintons and the Department of Justice.

He also used that claim earlier Saturday to fundraise.

"Folks, there's never been a situation like this in the history of our country," Trump said at a campaign rally here.

Trump also sought to discredit the women who have accused him of sexual assault in recent days, calling one a "crazy woman" and pointing to a statement from the cousin of another accuser.

John Barry, the cousin of Summer Zervos, a former "Apprentice" contestant who on Friday accused Trump of having groped her, had released a statement Friday evening through the Trump campaign alleging that Zervos had "praised" Trump and supported Trump's presidential bid until recently.

Trump argued that other allegations are "total lies" and have "already been proven so false."

But Trump primarily raised the allegations to argue again that the media outlets reporting on the allegations -- many of which describe actions Trump bragged about in a 2005 conversation that surfaced last week -- are doing so to sink his campaign.

"Remember this, it's a rigged election because you have phony people coming up with phony allegations with no witnesses whatsoever," Trump said. "The election is being rigged by corrupt media pushing completely false allegations and outright lies in an effort to elect her (Clinton) president."

A sitting senator, Jeff Sessions of Alabama, added his voice to Trump's attack in remarks before the GOP nominee took the stage, saying "they will not succeed" in manipulating the election.

Trump's remarks came after his campaign pushed out a plea for donations to supporters by pointing to his vow to investigate and prosecute Clinton if elected, a threat that is unprecedented in modern US political history. Trump even issued the threat to Clinton at the last presidential debate.

"As I promised on Sunday, if elected I will appoint a special prosecutor to look into Crooked Hillary's emails and get the answers the American people deserve," Trump says in the email.

He again cited his argument that Clinton is the "ultimate career politician, enriching herself off of the rigged system for decades while getting NOTHING accomplished."

When Trump brought up the threat at Sunday's debate, Clinton responded, "It's just awfully good that someone with the temperament of Donald Trump is not in charge of the law in our country."

To which Trump replied, "Because you'd be in jail."

The Department of Justice, acting on an FBI recommendation, declined to press criminal charges against Clinton regarding the matter over the summer.

Earlier Saturday, Trump continued to claim that the election is "rigged" against him, citing the sexual assault charges that have embroiled his campaign.

"100% fabricated and made-up charges, pushed strongly by the media and the Clinton Campaign, may poison the minds of the American Voter. FIX!" Trump tweeted.

He followed up: "This election is being rigged by the media pushing false and unsubstantiated charges, and outright lies, in order to elect Crooked Hillary!"

And again: "Hillary Clinton should have been prosecuted and should be in jail. Instead she is running for president in what looks like a rigged election."

Later in the afternoon, he added: "Nothing ever happened with any of these women. Totally made up nonsense to steal the election. Nobody has more respect for women than me!"

Trump has warned of a "rigged" election for months. He said in North Carolina Friday that "the whole thing is one big fix" and, railing against the sexual assault allegations, said he was the "victim" of a "political smear campaign."

But his comments come as his campaign has urged him to focus on issues and Clinton, particularly in the wake of politically damaging WikiLeaks releases, with just over three weeks to go before Election Day. Trump's poll numbers have been declining since the first presidential debate late last month, and his polling troubles accelerated with the surfacing of a 2005 tape last week in which Trump bragged about being able to grope women and get away with it.