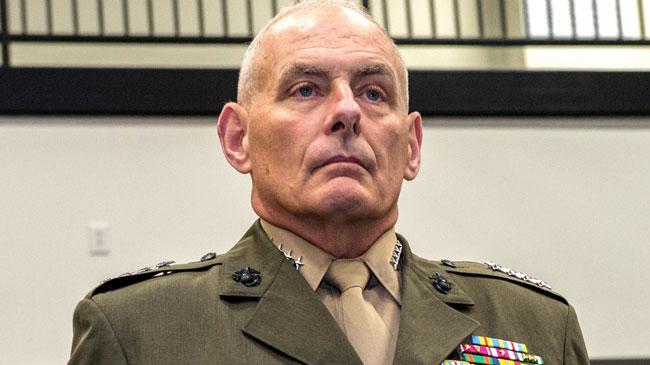 The former head of US Southern Command, Kelly was previously responsible for managing security threats posed by criminal drug networks based in south and central America -- an issue that Trump highlighted in his campaign, and to which Kelly would bring unique experience.

In his former role, Kelly also oversaw operations at the controversial Guantanamo Bay detention facility in Cuba. The outspoken general clashed with the Obama administration's push to close the facility, and told the Military Times in an interview that "there are no innocent men down there."

If Kelly and former Ret. Gen. James "Mad Dog" Mattis -- who was tapped as Trump's Secretary of Defense last week -- are both nominated and confirmed, then it would place two retired Marine generals into Cabinet posts in his administration.

Kelly served over 40 years in the Marine Corps, moving steadily through the ranks since enlisting in 1970, and taking over as commander of Southern Command in 2012. He is also a Gold Star father, having lost his youngest son, Marine 1st Lt. Robert Kelly, in combat in Afghanistan in 2010.

Kelly -- who would likely play a significant role in the planning and implementation of Trump's proposed border wall as the director of Homeland Security -- has publicly discussed potential threats along the southern border of the U.S.

In a March 2015 Senate Armed Services Committee hearing, Kelly testified about "the relative ease with which human smugglers moved tens of thousands of people to our nation's doorstep" and cautioned that "these smuggling routes are a potential vulnerability to our homeland."

"As I stated last year, terrorist organizations could seek to leverage those same smuggling routes to move operatives with intent to cause grave harm to our citizens or even bring weapons of mass destruction into the United States," Kelly said. "Addressing the root causes of insecurity and instability is not just in the region's interests, but ours as well, which is why I support President Obama's commitment to increase assistance to Central America."

In the same testimony, Kelly warned against complacency toward the spread of human smugglers and drug traffickers in south and central America. "Unless confronted by an immediate, visible or uncomfortable crisis, our nation's tendency is to take the security of the Western Hemisphere for granted. I believe this is a mistake," Kelly told the panel.