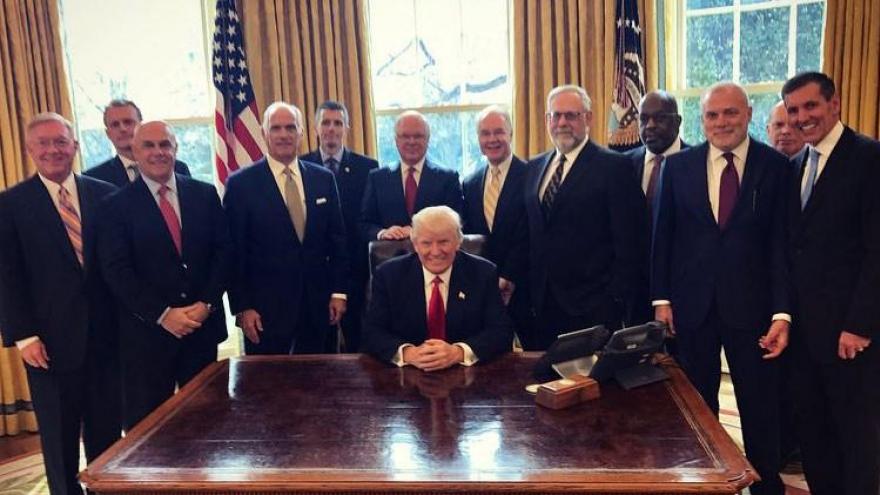 NEW YORK (CNNMoney) -- President Trump promised the nation's leading health insurers that his administration will work with them to stabilize the Obamacare markets and smooth the transition to the Republicans' plan for health care.

The president and insurers had a lot to discuss. Trump's first executive order directed federal agencies to start rolling back Obamacare. And he has promised to unveil a plan to repeal and replace Obamacare with more affordable coverage, though he has left many in the dark about the details -- including Congressional Republicans.

Trump and other Republican leaders have repeatedly promised that they will not yank coverage from those who currently have it through Obamacare. They can only fulfill that pledge if the insurers play along.

To kick off the meeting, Trump told insurers that "Obamacare has been a disaster and is only getting worse." He said he will unveil his "fantastic plan" soon, adding that the insurers "will like what they hear."

"The new plan will be a great plan for the patients, for the people, and hopefully for the companies," Trump said, promising costs will come down. "It's going to be a very competitive plan."

He highlighted that his proposal will allow insurers to sell across state lines to increase competition. However, that's already possible in some circumstances, and no carriers have moved to do it.

Trump told the CEOs that if the plan doesn't accomplish his goals, he'd let them take the fall.

"If things don't work out I'm blaming you anyway," he said in jest.

Speaking after the meeting, three CEOs told reporters that they and the president share the goal of serving consumers and making health care more affordable and accessible. They said they plan to work with the administration and lawmakers on health care reform.

"We're very glad to be with him today to hear that message and certainly willing and wanting to witness how this all will transition to a workable plan for the United States," said Joe Swedish, CEO of Anthem, which has said it is evaluating whether it will participate in Obamacare next year.

Insurers have grown increasingly jittery amid Trump's sweeping pronouncements and the infighting on Capitol Hill that has slowed the drive to repeal the law. Most recently, the nation's governors have entered the fray, with some Republican state leaders lobbying hard to keep Medicaid expansion. They met with the president early Monday morning to press their case.

Humana has already said it is dropping out of the individual market completely in 2018. In addition to Anthem, at least two other carriers -- Aetna and Molina Healthcare -- have said they are debating whether to participate. This could prompt even more insurers to withdraw and those that remain to hike premiums.

They are likely looking to Trump to ease their concerns.

Trump's administration so far has sent them mixed signals. His Health & Human Services Department has answered some of the industry's concerns in a proposed rule it issued earlier this month. The rule would provide insurers with greater flexibility in how much their policies would pay in each tier of coverage on the Obamacare exchanges, make it harder for people to sign up outside of open enrollment periods and give carriers more time to have their 2018 plans approved by state and federal regulators.

However, at the same time, the Internal Revenue Service quietly reversed a decision to start rejecting tax returns that fail to indicate whether filers had health insurance, received an exemption or paid the penalty for not having coverage. While this has always been key to enforcing Obamacare's individual mandate, the IRS had been processing returns without this information.

The IRS attributed the reversal to Trump's executive order that directed agencies to reduce the potential financial burden on Americans. However, it noted in a statement that the individual mandate is still in effect.

Any weakening of the individual mandate is sure to strike fear into the hearts of insurers. They depend on the mandate to bring in young and healthy participants to balance out older and sicker enrollees, which Obamacare requires them to cover.

Insurers have a long list of suggestions for the Trump administration and lawmakers on how to first stabilize Obamacare and then revamp the individual market. They had the opportunity to present them to the president firsthand on Monday.