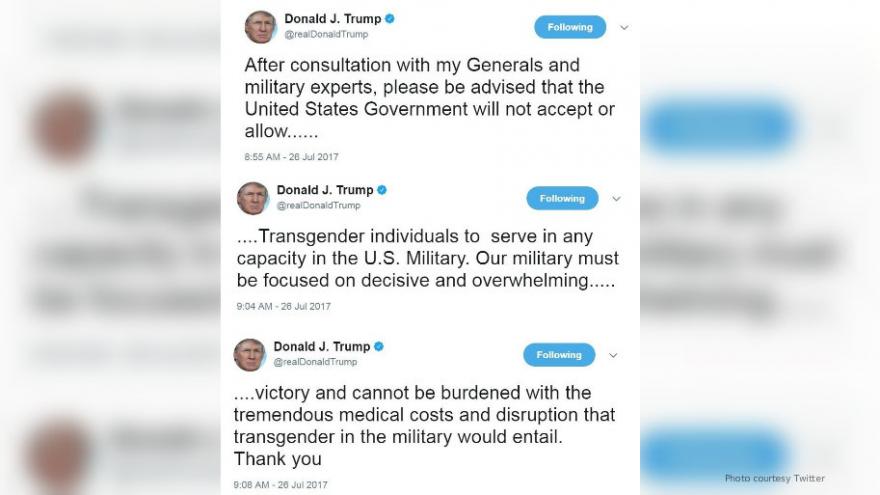 (CNN) -- President Donald Trump on Friday directed the military not to move forward with an Obama-era plan that would have allowed transgender individuals to be recruited into the armed forces, following through on his intentions announced a month earlier to ban transgender people from serving.

The presidential memorandum also bans the Department of Defense from using its resources to provide medical treatment regimens for transgender individuals currently serving in the military.

Trump also directed the departments of Defense and Homeland Security "to determine how to address transgender individuals currently serving based on military effectiveness and lethality, unitary cohesion, budgetary constraints, applicable law, and all factors that may be relevant," the White House official said.

The White House official who briefed reporters on the memo on Friday evening declined to say whether current transgender troops would be allowed to remain in the military under those policy guidelines.

The official signaled that the administration was returning to the military's pre-2016 policy under which no transgender individuals were allowed to serve openly in the armed forces, but said Trump was giving the secretaries of defense and homeland security leeway to determine the policy on currently serving transgender troops.

The official rejected any notion that Trump's directive amounted to discrimination against transgender individuals, and insisted that Trump was not walking back his rhetoric from the 2016 campaign when he vowed to fight for LGBT Americans.

"The President is the President for all Americans, and during last year's campaign he was the first GOP nominee to talk about LGBTQ issues at the GOP convention, but he also was critical of the Obama administration's change in that longstanding DOD policy," the official said.

"He's going to continue to ensure that the rights of the LGBTQ community, as well as all Americans, is protected," the official added. "This policy is based on a series of national security considerations."

The guidance comes a month after Trump said on Twitter that he would reinstate a ban on transgender troops, an announcement that took many in the military's leadership -- including the joint chiefs of staff -- by surprise.

"After consultation with my Generals and military experts, please be advised that the United States Government will not accept or allow transgender individuals to serve in any capacity in the U.S. Military," Trump said in a series of tweets. "Our military must be focused on decisive and overwhelming victory and cannot be burdened with the tremendous medical costs and disruption that transgender in the military would entail."

The White House offered no guidance at the time as to how the ban would be implemented, leaving transgender service members wondering about their future in the military.

Trump's decision reversed a policy initially approved by the Defense Department under President Barack Obama, which was still under final review, that would have allowed transgender individuals to openly serve in the military. Defense Secretary James Mattis announced in June that he was delaying a decision on whether to allow the military to recruit transgender individuals.

Trump's July announcement was met with widespread rebuke by members of both parties and civil rights advocates, who argued that Trump's decision reversed years of progress for LGBT rights and flew in the face of studies showing minimal impacts on the military.

A 2016 Rand Corp. study commissioned by the Defense Department concluded that letting transgender people serve openly would have a "minimal impact" on readiness and health care costs, largely because there are so few in the military's 1.3 million-member force.

The study put the number of transgender people in the military at between 1,320 and 6,630. Gender-change surgery is rare in the general population, and the Rand study estimated the possibility of 30 to 140 new hormone treatments a year in the military, with 25 to 130 gender transition-related surgeries among active service members annually. The cost could range from $2.4 million and $8.4 million a year, an amount that would represent an "exceedingly small proportion" of total health care expenditures, the study found.