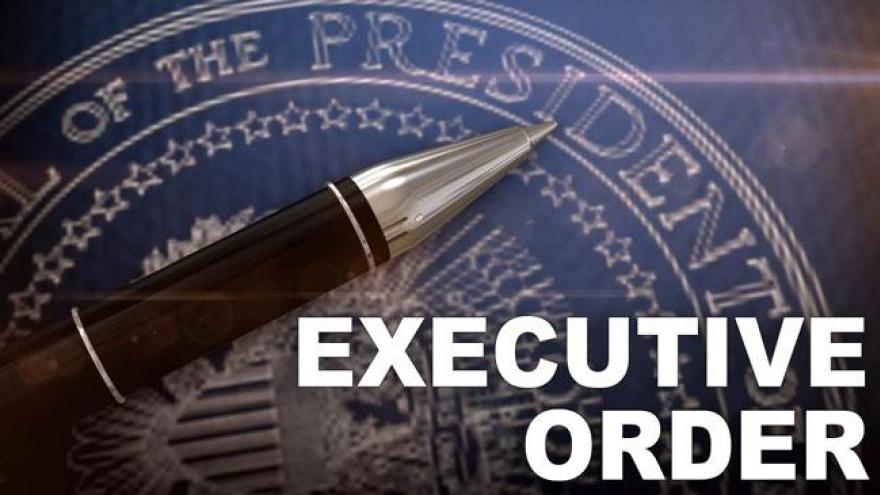 The order, which Trump inked during a ceremony in the White House Rose Garden, directs the IRS to exercise "maximum enforcement discretion" over the Johnson amendment, which prevents churches and other tax-exempt religious organizations from endorsing or opposing political candidates. It also provides "regulatory relief" for organizations that object on religious grounds to a provision in Obamacare that mandates employers provide certain health services, including coverage for contraception.

"We will not allow people of faith to be targeted, bullied or silenced anymore," Trump proclaimed during his remarks, which were marking the National Day of Prayer. "And we will never, ever stand for religious discrimination. Never, ever."

Trump's language stood in contrast to certain steps his administration has taken to bar entry to citizens from some Muslim-majority nations and his campaign trail vows to stop all Muslims from entering the country. Courts have put his travel ban executive orders on hold -- finding Trump's own words provided evidence of a "Muslim ban."

Religious discrimination is barred by the US Constitution.

In his remarks, Trump said that "pastors, priests and imams" were targeted by the Johnson amendment, and would be freer to engage in political activity under his executive order.

The order, which declares that it is the policy of the Trump administration "to protect and vigorously promote religious liberty," stops short of offering broad exceptions for groups to deny services based on religious grounds.

An earlier version of the order, which had previously leaked to The Nation, would have provided sweeping legal protections for people to claim religious exemptions, provisions that civil liberties groups claimed would allow for discrimination against LGBT Americans.

The order Trump signed Thursday is more modest in its scope. By directing the IRS to use its discretion in enforcing the Johnson Amendment, religious organizations are likely to escape punishment for backing political candidates. Religious leaders have argued the provision stifles their rights to free speech.

"America has a rich tradition of social change beginning in our pews and our pulpits," Trump said in front of an audience of religious leaders. "We must never infringe on the noble tradition of change from the church and progress from the pew."

"Under my administration, free speech does not end at the steps of a cathedral or a synagogue or any other house of worship," he went on. "We are giving our churches their voices back and we are giving them back in the highest form."

The 1954 Johnson amendment says any tax-exempt group can lose its exemption if it is found to have endorsed or actively opposed a candidate for political office. The IRS is officially tasked with investigating suspected violators of the law, though only one organization has lost its exemption as a result of IRS action.

Trump himself vowed early in his presidential tenure to get rid of the measure, though completely striking the amendment would require an act of Congress.

"I will get rid of and totally destroy the Johnson amendment and allow our representatives of faith to speak freely and without fear of retribution," Trump said in February.

Some religious leaders, however, object to any measure that would make it easier to inject politics into places of worship.

"For decades, the Johnson amendment has prevented houses of worship from being turned into partisan political tools. A majority of clergy -- and Americans -- support the status quo and oppose political endorsements from the pulpit," Interfaith Alliance president Rabbi Jack Moline said. "President Trump's executive order reportedly aims to gut the Johnson Amendment and clear the way for the Religious Right to weaponize their churches for partisan battle."

"If the effort succeeds these churches would become conduits for unregulated 'dark money' in elections, with no restrictions or disclosure requirements," he said.

In a letter delivered to House and Senate leaders last month, a group of religious leaders argued against scrapping the Johnson amendment, citing similar concerns that such a move could turn religious groups into political organizations.

"The charitable sector, particularly houses of worship, should not become another cog in a political machine or another loophole in campaign finance laws," the group wrote.

Selectively enforcing law has drawn scrutiny in past administrations, and could present another legal challenge to Trump's administration. Several of Trump's executive orders -- including an entry ban for citizens of certain Muslim-majority nations, and an order stripping federal funding from so-called "sanctuary cities" -- are on hold are courts weigh their legality.

The senior administration official downplayed any fears the religious order could face a similar fate.

"I don't think that we expect any legal challenges," the official said.