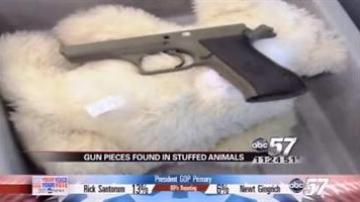 TSA agents had to rip open a Mickey Mouse because he was stuffed with part of a gun.

Look at these pictures released by the agency.

Officials said Monday a man was with his 4-year-old son, leaving Providence, RI, heading toward Detroit.

Inside the little boy's bag were three stuffed animals.

A screener saw a teddy bear, a bunny rabbit, and a Mickey Mouse on the x-ray machine. Inside each stuffed animal were gun parts.

When fully assembled, it would have been a completely functional 40 caliber handgun.

The man was then questioned by police. He told cops he didn't even know the gun parts were inside of the toys.

The gun was confiscated and the man and his son were allowed to continue on their trip.