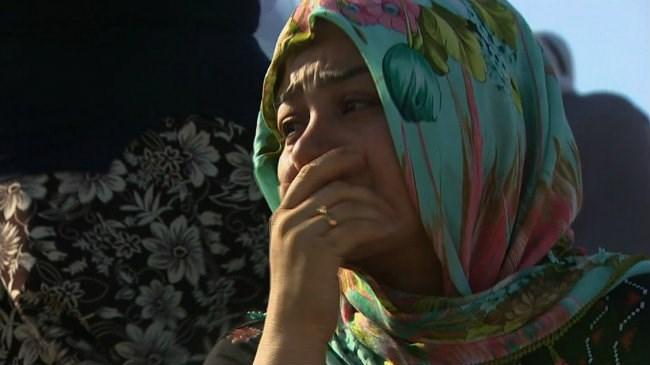 (CNN) -- In the horrific aftermath of a blast that ripped through a wedding at Gaziantep in southern Turkey -- being blamed by officials on a child suicide bomber -- CNN's Ben Wedeman visited the distressing scene.

Row after row of freshly filled graves stretch along the northern side of the hilltop cemetery outside Gaziantep. The soil in the graves is a rich red, carried from the fertile valley below, but the dirt on the hill is pale and powdery.

The contrast between the red and the white is striking, each grave standing out like a wound.

Crouching next to one of those new graves is an elderly woman in a white dress and head scarf. Silently, staring intently at the red soil, she weeps, her head moving from side to side.

Across from her, a man in his fifties, his leathery, lined, tanned face suggests a life of struggle and hardship. He also was crying, quietly, sometimes looking up to the heavens, perhaps with a prayer, perhaps with a simple question: "Why?"

I watched this scene but couldn't bring myself to interfere.

From the simple numbered aluminum plaque thrust into the fresh dirt, I knew they were mourning one of the many victims of Saturday night's bombing.

'Too young to die'

Half an hour earlier, relatives lowered the body of 14-year-old Mirgin Gurbuz, wrapped in a simple white sheet, into her grave. Her mother watched, weeping and moaning at the center of a group of female relatives.

"She was a student. She died too young," was all her mother could say. Mirgin's grave was also marked with a numbered plaque. A more permanent headstone, with her name, and date of birth, will come later.

Death came to Gaziantep late Saturday, on a night when most of the residents of the predominantly Kurdish working class neighborhood of Beybahce were out in the street, celebrating the wedding of Besna and Nureddin Akdogan. A band was playing, and the many of children who seem to make up the majority here were reveling in the noise and excitement.

Just before 11 p.m. when the party was beginning to wind down, a resident heard a huge blast. He had just returned to his home around the corner. Moments later, rushing out to see what had happened, he was confronted with a scene of total carnage.

He recalled "the dead, the dying and body parts covering the ground, people screaming and crying. There was blood everywhere."

A Syrian Kurd from Aleppo, he had deserted the Syrian Army after being wounded in battle fighting jihadis, he told me. "Sixty stitches," he said, pointing to his scar.

The walls of houses around the explosion are splattered with dried black blood and tiny body fragments. Dangling from the latticework of the window of what was to be the home of the newly-weds, a dried strip of human flesh.

According to Turkish officials, at least 22 of the more than 50 victims were under the age of 14.

One of them was Hakki Okur. His cousin, Mesut Bozkurt spent the night going to Gaziantep's hospitals and police stations searching for news of Hakki. At 5:30 p.m. his phone rang. Hakki had been found. Please come to the hospital to identify the body, he was told.

"There were no injuries on his head but burns on his chest," Mesut said. "We think he may have been trampled in the panic since he was a skinny boy."

Turkish officials are confident the attack was the work of ISIS. The reasons for this are clear -- it was a high-profile, high-casualty attack, designed to inflict maximum horror, and aimed at Kurds, who in Iraq and Syria have been one of ISIS' most implacable foes. And they believe, according to President Recep Tayyip Erdogan, that the bomber was between the ages of 12 and 14.

Gaziantep has long had close ties to Syria, which is just 25 miles away. Until the collapse of the Ottoman Empire, there was no border separating the two lands.

When I lived and worked in Aleppo in the late 1980s and early 1990s many of my Syrian friends traveled to Gaziantep on the weekends to buy consumer goods and such luxuries as sugar and flour.

At the time, Hafiz Al-Assad (Bashar's father) was in power, and such staples were rationed and often in short supply. Compared to Syria, Turkey was seen as the land of plenty, of relative freedom.

Syrian war has drifted into Turkey

I was moonlighting as a freelance print journalist at the time, and every weekend drove to Turkey to send my stories. Back then it was forbidden to have a fax machine in Syria without government permission, and even if I had had one it wouldn't have mattered.

Our home in Aleppo, like so many other homes, had no phone line. Turkey, on the other hand, had plenty of phones and plenty of faxes.

Syrians don't come to Gaziantep to shop anymore. Thousands fleeing Syria's brutal war have settled here, trying to scratch out a living until they can return home. Several were killed in Saturday's bombing, the Kurd from Aleppo, told me.

The war in Syria has drifted across the border into Turkey.

A series of suicide bombings going back to July 2015 attributed to ISIS, born of the war in Syria, has driven that fact home. Saturday's bombing was a reminder of that. But no reminder was needed.