Two drivers rushed to hospital after head-on crash in Mishawaka 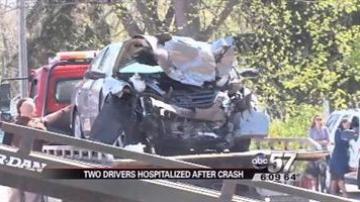 MISHAWAKA, Ind. -- Two drivers were rushed to the hospital on Monday after a head-on crash in Mishawaka.

The accident happened around noon on McKinley Highway.

The driver of the PT Cruiser had to be cut from the car.

But firefighters told us it could have been a lot worse!

Both drivers are expected to be okay.

The road was clsoed for about half an hour while crews cleaned up the crash.