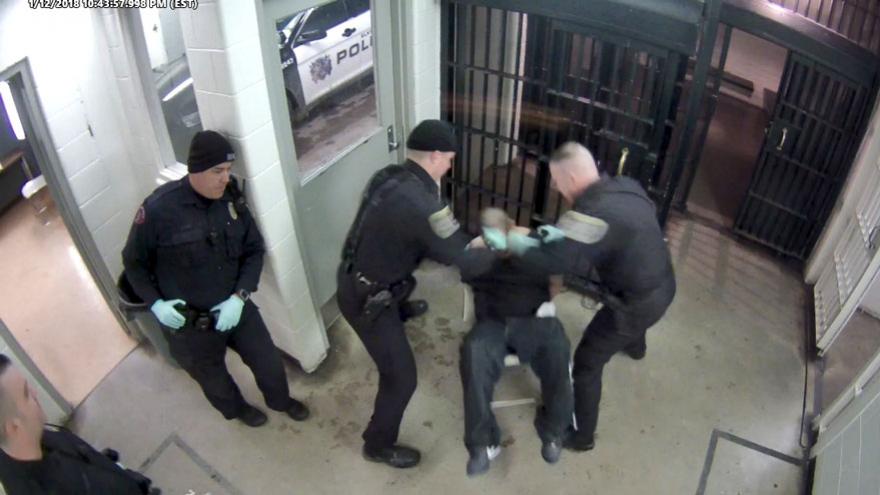 A federal grand jury indicted two Elkhart Police officers on civil rights violations in connection with allegations they used excessive force against a man who was handcuffed and seated.

The incident was recorded and the video was released to the media.

Cory Newland, 35, and Joshua Titus, 30, were indicted for civil rights violations for allegedly using unreasonable force against a man in custody.

In the alleged incident, the arrestee was seated in a chair with his hands handcuffed behind his back when he spat at one of the officers.

Newland and Titus struck the man in custody in the face, causing him to fall backwards onto the floor, according to the indictment.

Once on the ground, Newland and Titus are accused of punching the man multiple times, resulting in injury, according to the indictment.

“My Office takes allegations of civil rights violations seriously, including use of excessive force by police officers sworn to uphold the law,” said U.S. Attorney Thomas L. Kirsch.  “Maintaining integrity in the criminal justice system by investigating and prosecuting police officers who step out of bounds with the law, while working with, training and promoting good relationships with law enforcement who operate within the law are important functions of my Office.”

The two officers were charged with misdemeanor battery in Elkhart County in November and were placed on paid leave.

Per department policy once the criminal process has been concluded an internal investigation will be completed to determine what policies may have been violated. At this time officers Newland and Titus remain on paid administrative, however documentation, requesting their status be changed to unpaid administrative leave, is being drafted and will be sent to the Board of Safety.

I would like to thank the community for their understanding as we all work through this process and continue to move forward.

“While this continues through the judicial process, I cannot comment on the case specifically. However, I would reiterate the steps my administration has already taken to empower positive change at the Elkhart Police Department and develop collective solutions that our community can be proud of. We continue to work with an independent, third-party to assess the systems, policies, and practices of the Department, specifically in areas such as use of force. When this assessment is completed later this year, we will have a tangible roadmap for how we can, and will, improve our service to the Elkhart community. With this ongoing work and the leadership of Chief Chris Snyder, I believe our City and our police department are moving forward in the right direction.”

WARNING: Some viewers may find the video disturbing