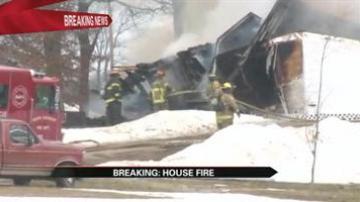 MARSHALL COUNTY, Ind. -- Two people were taken to the hospital after a house on 5C Road caught fire Tuesday afternoon in LaPaz.

Firefighters say there were five people in the home at the time of the fire.

Neighbors said the son-in-law kicked down the door of the house to get inside to rescue his 80-year-old mother-in-law who has dementia.

More than 20 fire trucks from six different departments responded to the fire.

Water had to be trucked in because there are no fire hydrants in the area of the fire.