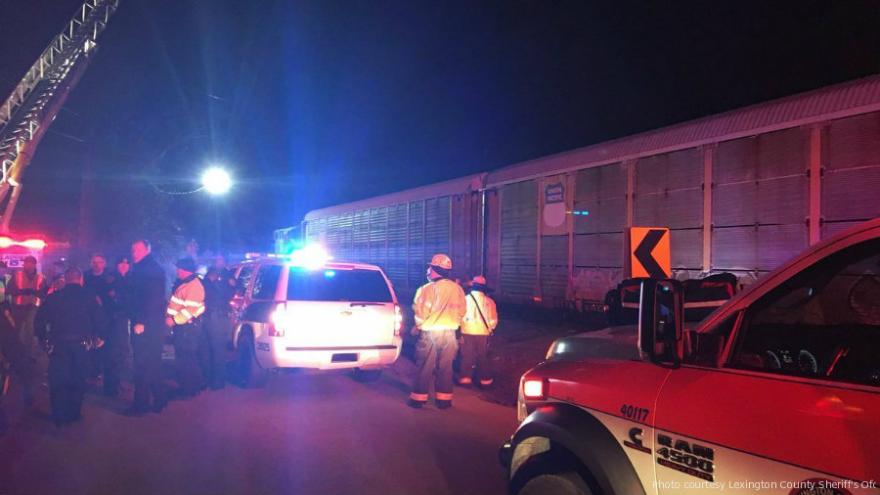 (CNN) -- Two people were killed and 116 were injured when an Amtrak passenger train was diverted off the main track onto a rail siding and crashed into a stationary freight train in South Carolina, an NTSB official said Sunday afternoon.

Amtrak Train 91 was traveling south and should have continued straight down the tracks, but the rail switch had been manually set to send the train onto the rail siding where the CSX train was parked, NTSB Chairman Robert Sumwalt said at a news conference.

"Key to that investigation is learning why that switch was lined (aligned) that way," he said.

Sumwalt said video from the front of the Amtrak train had been recovered and sent to Washington, where it will be inspected. That will help investigators determine what happened in the 2:30 a.m. collision, including whether the train was exceeding the 59 mph speed limit, he said.

Officials had initially said 70 people with injuries were transported for treatment, but later adjusted the figure.

Richard Anderson, Amtrak CEO and president, told CNN's Rene Marsh that the signal system along the section of track where the crash occurred was down and the tracks were being manually controlled by CSX.

According to Anderson, CSX has complete control of the tracks, signals and switches in the area where the crash happened.

A CSX spokesperson issued this statement on Sunday:

"Our sincere condolences go out to the families of the two individuals who passed away following the tragic events that took place in Cayce, South Carolina, early this morning. We remain focused on providing assistance and support to those impacted by today's incident.

"CSX hosts more passenger trains on its network than any other major railroad in the United States, and passenger rail remains one of the safest ways to travel. The National Transportation Safety Board is leading the investigation into this incident and CSX will continue working with the investigating team."

The Amtrak Train 91 was traveling between New York and Miami with a nine crew members and 147 people aboard when it collided with the CSX freight train in Cayce about 2:35 a.m. Sunday, derailing the lead engine and some of the seven passenger cars, Sumwalt said.

Sumwalt said the CSX train, made up of two locomotives and 34 empty cars, had just unloaded a shipment of automobiles at a nearby siding. The CSX train was empty of people.

About 5,000 gallons of fuel were spilled, authorities estimated, but Cahill said there was "no threat to the public at the time."

The National Transportation Safety Board has launched an investigation. Sumwalt said the investigation should take 12 to 18 months.

President Donald Trump has been briefed on the accident, according to a statement from White House deputy press secretary Lindsay Walters.

"My thoughts and prayers are with all of the victims involved in this morning's train collision in South Carolina," Trump wrote in a tweet on Sunday afternoon. "Thank you to our incredible First Responders for the work they've done!"

Derek Pettaway was a passenger in one of the train's rear cars, headed for Orlando, he told CNN on Sunday morning. He was awakened by the impact, and the crew came through the cars "really quickly" and got everybody off the train.

"Nobody was panicking," Pettaway said. "I think people were more in shock than anything else."

Pettaway was discharged from a hospital with minor whiplash, he said. From there, he went to a shelter at Pine Ridge Middle School for passengers who didn't suffer serious injuries.

Sunday's was one of several fatal incidents involving an Amtrak train in the past few weeks.

In December, an Amtrak train derailed near DuPont in Washington state and hurtled off an overpass onto Interstate 5, killing three people. The Amtrak engineer on that train told investigators he mistook a signal and braked moments before the deadly crash, according to the National Transportation Safety Board.

A CNN investigation found that engineers and conductors had complained to supervisors that they were not adequately trained for the new route before the crash of Amtrak 501.

Last week, an Amtrak train carrying members of Congress to a Republican retreat in West Virginia struck a truck near Charlottesville, Virginia. Investigators looking into the crash are focusing on the actions of the driver of a truck, a source with knowledge of the investigation told CNN.

In mid-January, a pastor and his wife were killed in Nash County in North Carolina when their SUV was hit by an Amtrak train, according to CNN affiliate WNCN. The crash occurred after the driver maneuvered the vehicle around the lowered crossing arm.