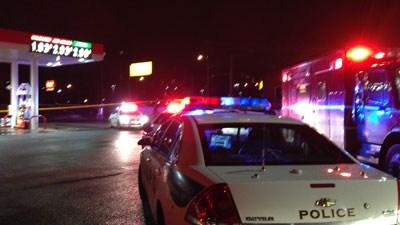 The first shooting happened at the corner of Dunham and Liberty streets in South Bend.

The shooting happened around 7:30 p.m. Police say a man was shot in the leg, but his injury is not life-threatening.

Around 8 p.m., a man was shot in the parking lot of the Kroger on Western Avenue.

A witness said she heard gunshots and saw a group of guys running.

"Patrons called in and said they saw a gray car in the parking lot that had been shot up, we got here and found the victim still in the car suffering from a wound," said Sergeant Chuck Stokes of the South Bend Police Department.

The victim of the Western Avenue shooting was taken to surgery and his condition has not been released.

Police say they need anyone who heard or saw anything to come forward.

Witnesses were shaken up and one said he is tired of the ongoing crime especially because he could have been caught in the crossfire.

"I don't understand why people have to keep putting themselves in these situations, make it unsafe for others. My whole issue is, I'm supposed to meet up with my cousin and I'm like wow, my heart rate, I'm upset, nervous, because I was just right here," said Jarome Payton, a witness to the Kroger shooting.

Police said the two shootings are not related.