Uber buys a bike-share company as it looks beyond cars 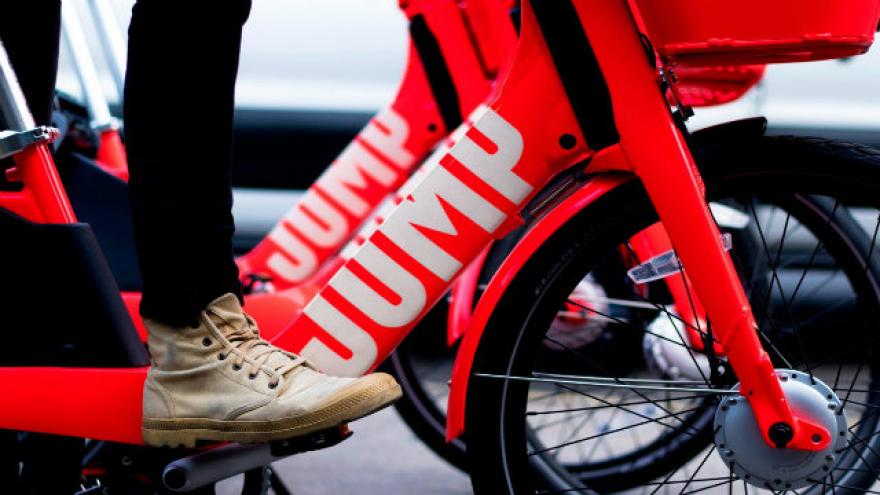 Uber has acquired a bikeshare company as it expands beyond cars in its efforts to reshape transportation. The ride-hailing company on Monday said it bought Jump Bikes, a New York-based firm that operates in 40 US cities. The electric bikes from Jump Bikes have proven popular in San Francisco. Photo courtesy CNNMoney

(CNN Money) -- Uber has acquired a bikeshare company as it expands beyond cars in its efforts to reshape transportation.

The ride-hailing company on Monday said it bought Jump Bikes, a New York-based firm that operates in 40 US cities.

Uber CEO Dara Khosrowshahi said in a blog post that the company wants to make multiple modes of transportation available in its app, including bicycles and subway rides. Financial terms of the deal were not disclosed.

Some of Uber's ride-hailing rivals have already invested in bicycles. In January, China's Didi Chuxing expanded into the huge and fiercely competitive Chinese bike-sharing market. In the United States, Lyft announced a sponsorship of Baltimore bikeshare stations last month.

Fewer people are riding on public transportation in the United States, according to research, as commuters shift to ride-hailing services such as Uber and Lyft. But motor vehicles use public spaces less efficiently, and many cities are looking for solutions to increased congestion.

Uber sees bicycles as a way to offer fast and affordable transportation.

"Our ultimate goal is one we share with cities around the world: making it easier to live without owning a personal car," Khosrowshahi wrote. "Achieving that goal ultimately means improving urban life by reducing congestion, pollution and the need for parking spaces."

Until last year, Jump Bikes was known as Social Bicycles and provided bikeshare systems for city governments across the United States. The company changed its name when it launched its own fleets of electric bicycles, which are available in San Francisco and Washington. The Jump Bikes branding will remain after the acquisition.

Dockless bikeshare companies have spread quickly across the United States in the last nine months after breakout success in China. The bicycles have sparked controversy at times, with critics complaining they can be parked irresponsibly and litter sidewalks.

Uber is side-stepping this controversy with the acquisition of Jump Bikes. Its bicycles are designed with a lock built in, so riders lock the bicycles to a rack or pole.

In January, Uber began offering San Francisco customers a way to reserve Jump Bikes from within its app. Jump Bikes CEO Ryan Rzepecki credits that tie-up with boosting the exposure of his startup's bicycles. The bikes are getting ridden more than six times a day on average, according to Rzepecki.

Given Uber's scale, Rzepecki expects to be able to spread Jump's bikes further and faster. In 2019, he plans to make a significant push into Europe.

"We don't have to worry about acquiring customers," Rzepecki told CNNMoney. "Now it's just about shifting mode and perception and getting people willing to try a bike instead of a car."