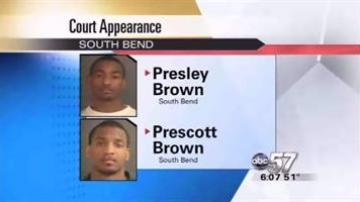 Presley and Prescott Brown apleaded guilty to multiple charges on Thursday, including attempted battery, criminal recklessness, and assisting a criminal.

A third man, Kevin Burrell, is scheduled to go to trial next month.

Police say last November the two brothers along with a third man approached Lt. John Collins at his home. Investigators say the retired officer had just left an ATM.

When Presley Brown pointed a sawed-off shotgun at him, Collins fired back with his own gun. One of the suspects was hit in the arm and foot.

The retired cop was not hurt.