UPDATE: Identities of officer and deceased released in shooting 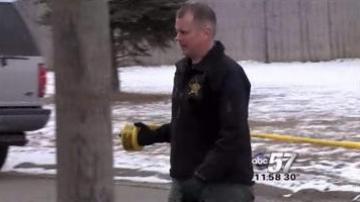 ST. JOSEPH COUNTY, Ind. -- ABC 57 News now knows the identities of both the officer who was injured in Monday's incident on Wedgewood Drive, and the man who police shot and killed.

We have just heard back from Nancy Pemberton, Deputy Coroner of St. Joseph County, regarding the identity of the man who was shot and killed. The suspect, 37-year-old William Barker, was from Niles, Mich.

ABC 57 News also heard back from Lora Bentley with the St. Joseph County Prosecutor's Office. She said that the deputy who was injured during the incident is Deputy Trent Babcock.

Babcock has been with the Berrien County Sheriff's Department since 2002.

The shooting happened near the Indiana - Michigan state line, just south of the border.

Police say they were trying to serve a warrant when things went wrong. Officer Babcock was stabbed, and Barker was shot. Barker eventually died.

The autopsy was performed on Tuesday afternoon. The Coroner's Office reports that Barker died of multiple gun shot wounds. Pemberton said that the results from Tuesday's autopsy are preliminary. Officials will have to wait six to eight weeks for results to be finalized.

ABC 57 News did some digging and found Barker's arrest history in Elkhart County. It dates all the way back to 1996 and includes charges for multiple counts of burglary, fleeing from police, leaving the scene of an accident, and being a fugitive from justice.

Barker is also currently featured as a wanted fugitive in Berrien County for Larceny on michianacrimestoppers.com.

ABC 57 still hasn't confirmed the exact location on where the police chase began on Monday. Police said it started at a hotel on U.S. 31 North. We drove up and down that road on Tuesday asking hotels if they saw anything, and no one said they knew where the chase started. Police said they will not be releasing the exact address.

According to the St. Joseph County Prosecutor's Office, the case remains under investigation by the County Metro Homicide Unit and no charges have been filed.

We will bring you more on this story in later editions of ABC 57 News.