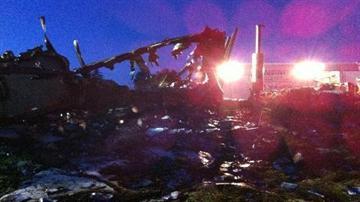 This all started when a semi tractor trailer carrying a flammable liquid caught fire Tuesday around 1:30 a.m. No injuries have been reported and the cause of the fire is unknown.

The entire westbound lane was closed periodically as wreckage was cleaned up from the area.

Officials said the truck that caught on fire had to have the remaining diesel fuel and contents off loaded to another truck to be removed. The delay through the area was approximately five minutes.

Officials also told ABC 57 News that the semi fire on the toll road led to a separate accident near mile marker 58.

Two trucks collided, one carrying 120 livestock. No injuries from that accident have been reported.