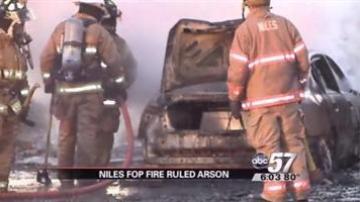 NILES, Mich. – Investigators are looking into a case of arson at the Fraternal Order of Police Lodge 95 in Niles.

Emergency crews were called to the scene of a fire on North State Street on Wednesday around 5:15 a.m. when the fire broke out.

ABC57 News was the first crew at the scene where flames were through the roof of the building.

No one was inside the facility, and no one has been transported to the hospital for injuries.

Police called the fire suspicious due to the fact that there was a car parked irregularly under an overhang. They say the car is not parked there normally and was completely engulfed with smoke.

Fire crews did have some assistance from the Clay Fire Department and are still working on some hot spots. The building is believed to be a total loss.

Fire investigators determined that the fire started near the car parked outside the building.

The Police Department has impounded and identified the car.

Officers are chasing leads. In the meantime, the park will remain closed, which will push back little league practice.