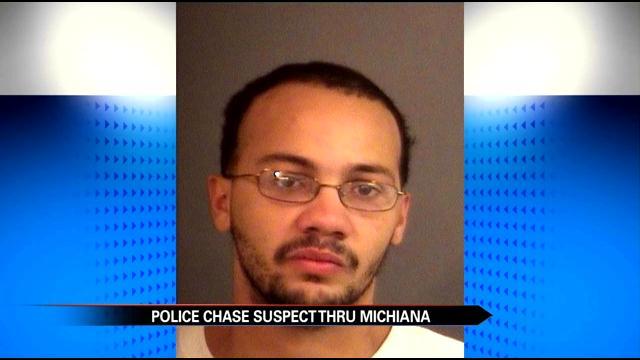 A police pursuit ended when the suspect plunged into a lake on Notre Dame's campus around noon on Monday. Police identified and arrested 23-year-old Joshua Ringle following a crime spree.

The suspect is suffering from hypothermia but police said no one else was hurt.

Lt. Tim Williams with the Mishawaka Police Department said they called off a car chase with this suspect twice in 12 hours.

The first chase happened shortly after 1a.m in the 200 block of South Hill Street. Police said Ringle was violating a protective order, and when they arrived on scene, he fled in a vehicle. Police called off the chase because it was dangerous.

Around 11:30a.m. officers went to follow up at the West Jefferson apartment complex where they believed Ringle was staying.

Williams said, "It started in the area of 1500 North Liberty. The subject ran south and then west so officers were able to come up with the actual suspect on foot in the area of Lowell Wood which is right off of Lowell. During that foot chase he did a home invasion there, stole a vehicle. And at 11:47a.m. officers ended up in a vehicle pursuit with the same subject, Josh Ringle.”

Police quickly called off the pursuit because of the influx of civilians who were shopping.

Witnesses said Ringle flipped his car near the intersection of Grape and Douglas road, and then kept going.

Shortly after the car was spotted parked by a library on Notre Dame's campus.

Williams said, "One of our officers made contact with Mr. Ringle over by the golden dome. The subject Mr. Josh Ringle took off from that officer. Another foot pursuit began and Josh ran into the lake located there on Notre Dame's campus at 12:08p.m. Mr. Ringle stayed in the water making threats towards police that he had a gun and that he would shoot us.”

Notre Dame's fire department and several officers got in a boat to approach Ringle. It ended up that he did not have a gun and officers were able to capture and arrest him at Saint Mary's of the Lake at Notre Dame.

Ringle was taken to a hospital for a medical evaluation and then booked in the St. Joseph County Jail.