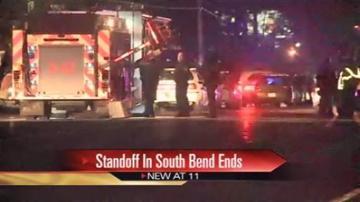 ST. JOSEPH COUNTY -- The St. Joseph County SWAT team was called in after a man armed with rifle barricaded himself inside his garage and turned on his truck in an attempted to take his own life.

The man is in critical condition.

Police were called to a home along U.S. 31 between Madison and New roads around 6:30 p.m.

Officers closed down U.S. 31 in both directions for over two hours as negotiators tried to talk the man down.

The call originally came from family members asking police for a welfare check. They said the man had been suffering from depression and had recently been to a VA hospital to get treatment.

When police arrived, they found a man in a closed off, detached garage with his truck running. The SWAT team and negotiators were called to the scene in an attempt to talk to him.

Police tried to communicate with the man using a squad car's PA system, but were unable to hear the man when he responded to officers. Then police lost communication, so officers broke out one of the garage windows in an attempt to ventilate the area so the man would not be overcome by the carbon monoxide levels.

The SWAT team used a special camera to look inside the garage to locate the man before officers entered.

"He was located sitting in a chair, truck running. He was by the tail pipe with a blanket wrapped around him and a long gun at his feet. It was determined to be a .22 caliber rife," said St. Joseph County Sheriff Michael Grezgorek.

The SWAT team found him with three gunshot wounds to the chest. However, police still do not know exactly when these injuries were sustained.

Police say the man was conscious and alert when he was taken to the hospital. Right now, police say the 65-year-old is in critical condition and currently recovering in the ICU.